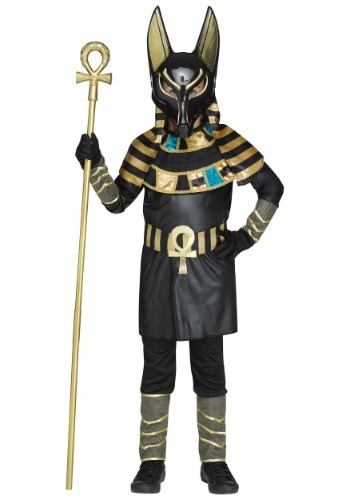 Is your kid fascinated by Egyptian mythology? Do you notice his eyes light up whenever the pyramids are featured on TV? Pretty understandable, through the ages, the Egyptians left a multitude of mysterious tombs and temples scattered across the desserts. From the iconic pyramids to the weird temples that held thousands of mummified dogs, the Egyptians have amazed and confused us so many times. We have to wonder, what else is out there hidden by the literal sands of time?

When looking at Egyptian art we see a powerful character come up again and again. Anubis, the God of the underworld is the guy that keeps those no good mummies from returning from their crypts. From seeing the care the Egyptians took with their tombs and necropolises we know that a good afterlife was pretty important to them, so it's no wonder why they took such care to honor this God with the head of a jackal. Anubis kept the busy world of Egyptian afterlife running smoothly, after death he'd guide the souls of the embalmed to their rightful place, as long as everything in the tomb seemed above board. So, though your child may seem intimidating when he dresses up as Anubis, he is dressing up as one of the good gods.

Though he sometimes showed up as a full-on jackal, this costume portrays Anubis in his humanoid form, which is both more commonly portrayed and much easier to dress as. The gold, black, and turquoise colors of the neck and headpiece gives the costume the regal appearance that Anubis would expect. Topped off with a show-stopping jackal mask, this Anubis costume cuts quite an imposing figure. Those Halloween mummies won't dare cross this guard dog.