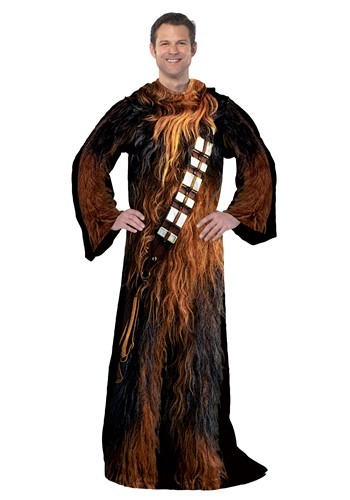 We all know that Chewbacca is the best of all of us. He's brave. He's a warrior that can take down any threat... (Except maybe Kylo Ren, but we can give him a pass on his adoptive nephew, right?) He's otherwise a rough and tumble kind of Wookiee that we know is always alert and ready to act at a moment's notice.

That said, we can't expect him to be ready for a fight at all times! What's he supposed to do when the Millennium Falcon hits Hyperspace and they're just going to be traveling there for a while. Yeah, just because the films cut right to arrival doesn't make that sort of thing instant! This Wookiee's gotta get in those crucial zzz's some time!

So, when you need to take a Wookiee-style nap while still feeling rugged, this Chewbacca Throw is just the way to go. This reversed robe has black and brown coloring throughout to look just like our Wookiee friend's fur. The bandolier straps over your shoulder for that extra dose of realism. Perfect for a sound slumber or for when it is time to snuggle in for your favorite Star Wars marathon.

If you've ever dreamed of being in the world of Star Wars, just imagine what Chewbacca was dreaming of! Before you you blow your mind in that hyperspace of thought, rest up in this Chewbacca Throw and be one with the Wookiee.