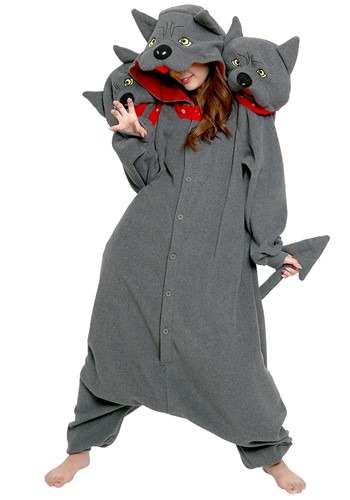 Four Heads for the Win

Once upon a time, deep in the Underworld realm, the most friggin adorable puppy ever started pouncing around at the gates. He was just a little odd, though. In fact, very odd. Three heads kind of odd! Hades just had to keep the little guy around. He grew up to be a pretty tough guardian. Not only could he smell just about anything creeping closer, but those three heads made sure that nothing could go unnoticed!

Cerberus became a popular companion all over the place. (We even hear some bearded wizard with a penchant for magical beasts keeps one hidden in a school somewhere!) We assume it has something to do with how soft and fuzzy he is! Still, there's one thing that would make this three-headed doggo even better. You guessed it: another head!

So, maybe you don't actually want to go hunting around haunted schools or the literal underworld just to bring home a snuggly companion. We've got one even better: this Cerberus Kigurumi costume! Slip into the most comfy quasi-pajamas you've ever felt and flip the hood over your head. You'll have pudgy little legs, an adorable tail, and twin heads hugging your hood, too. Let out your howl and you might find that you've got a couple guardians to watch your back while you nap. What could be better!?

Everyone knows that when a wolf lets out that moonlit howl, every other wolf in the area is sure to join in. We have to wonder how it's going to sound when a few of those howling heads are all you! Of course, if you and your pack all gear up in a Cerberus Kigurumi, you're bound to make some real music!