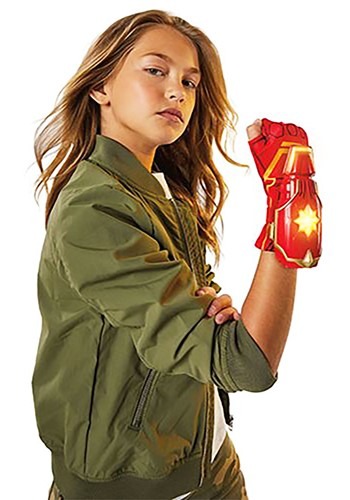 THE HAND OF A HERO

So, you want Carol Danvers’ powers? It’s natural. As Captain Marvel, she can fly faster than a fighter jet, so that means she never has to book a flight on an airliner. She’s strong enough to lift a city bus with one hand, so rearranging her furniture at her apartment must be a breeze. Also, she can shoot some serious energy beams from her hands. We’re talking super-charges beams of energy that could cut a S.H.I.E.L.D. helicarrier in half like it was made out of butter. Who wouldn’t want those powers?

Well, unfortunately, getting some major powers like that isn’t exactly easy! We’ve been trying for years, but have yet to acquire them. The good news is that this Captain Marvel Photon Power FX Glove is easy enough for anyone to use, so anyone can feel like a super-powered hero!

This Captain Marvel glove is officially licensed and it takes plenty of details from the movie. The top has a light up module with a giant star on top of it. Just press the button to activate the lights and sounds. One size fits most, so all you have to do is slip it on to feel like the Marvel powerhouse character.

If you want to add that extra touch to your Captain Marvel costume, then this glove is the perfect way to do it. It might not help you gain the strength to lift a city bus, but it will put on a lightshow on your hand… which is almost like a superpower.