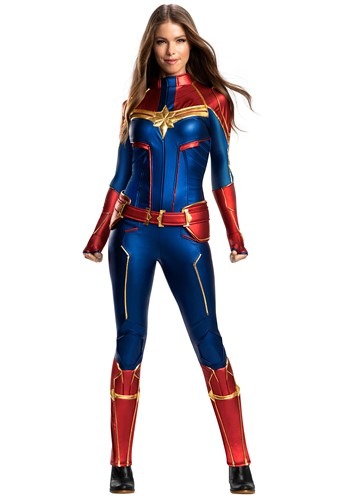 Kinda Done With It!

Ever been told what you're able to do? Have you ever been asked just to smile? How about called young lady by someone who you know in your gut is still half your years in emotional maturity? How about the real kicker—have you ever been told what you're capable of as someone tried to sweep you to the sidelines to take the win for themselves? If you can relate to any of that, we're sure that you can also relate to Carol Danvers and her motto: higher, further, faster!

Danvers is so over being told what she's capable of and is plenty happy to stop fighting with one arm behind her back. If you feel the same way, it may be time to channel some of that cosmic strength yourself and suit up Captain Marvel style. We can't promise that you'll be firing out energy blasts and gaining the ability to fly safely through the vacuum of space without some serious technological assistance, but gearing up in these brilliant colors is a step in the right direction.

Bring Captain Marvel back to Earth when you dress up in this officially licensed Grand Heritage costume. This is a shining jumpsuit printed to look just like the redesigned Kree armor worn by Carol Danvers in the hit film and comics. The bodysuit features raised stitching and layers to keep the look authentic as well as the belt and gloves to complete her stunning superhero style. (No power dampening bracelet to keep you one-handed in a fight, either!)

There's no freedom quite like flight, superpowered combat, or practical invulnerability. Except, of course, the ability to speak your mind and look as awesome as you feel. We're happy to help by offering this Captain Marvel costume so you can feel free to go 100% marvelous.