[SPOILERS] Attack on Titan: How to Kill a Titan [Infographic] 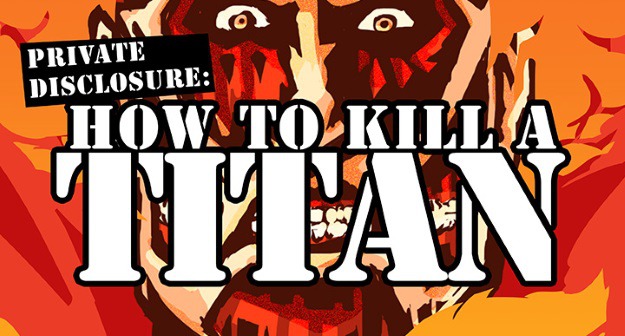 Attack on Titan (aka 進撃の巨人 or Shingeki no Kyojin) made a colossal splash on pop culture the last few years. From the pages of the unstoppable Japanese manga to the anime series you couldn’t peel your bloodshot eyes away from, Attack on Titan took the world by gnashing-toothed storm. And the storm only seems to intensify with time!

There was the live-action movie making a footprint on Comic-Con, wild speculation about the true nature and origins of Titans, and “leaked” information that brewed the perfect storm for fans and YouTube/Wikia speculators. Yep, the mystery mingled with misinformation created a steamy mess that we couldn't resist. So, we tried to do some untangling by dredging up information that true fans might appreciate. Again, proceed with caution, but if you can still enjoy a show or manga with a little bit of the backstory in your noggin, then spoil away friends!

The first infographic in this post, Private Disclosure: How to Kill a Titan, includes spoilers from season one of Attack on Titan that anyone with a Netflix account or the DVDs could potentially know. The second infographic underneath, Classified: Known Titan Shifters, also includes TITANIC - potentially show/manga RUINING - spoilers. Last, there is potentially some speculation that may be written out of the plot, as all of the enclosed information was learned on shingekinokyojin.wikia.com, and we can't control what happens from this point. You know, should the writers change their direction or what have you! In other words, take it with a grain of salt, and don't beat us about the head and nape of the neck if anything changes down the way.

Private Disclosure: How to Kill a Titan Transcript

Know your enemy, even if you don't understand it. Titans appeared 107 years ago to devour and bring your humanity to near extinction. They seemingly feed for pleasure, deriving no sustenance from their human prey. While so much is still unknown, this survival guide will help to keep all your organs and bones in your body where they belong. Stay alert and work together. We may be smaller but are no less deadly. Let us reclaim our lands in the name of our fallen!

No demonstrated intelligence, these Titans are generally more human-like in their appearance, although they sometimes have large heads in proportions to their bodies.

Possibly the most common. 7M class Titans have very large heads for their frame with a semi-quadruped, ape-like stance.

Most similar to human body proportions, this is an active and spry form of Titan.

After 100 years of peace in the year 845, the Colossal Titan was the first to remind humanity of its vulnerability during the fall of the Wall Maria. Tall enough to peer over the Walls, it was he who breached the wall, causing the Fall of Shiganshina before vanishing mysteriously and going unseen for five years.

Given the massive size of Titans, we must train with Three Dimensional Maneuver Gear, also known as Vertical Maneuvering Equipment or Omni-directional Mobility Gear. Becoming a master with this gear requires practice and discipline, but when used correctly, it represents our best tool for disposing of the Titans.

The Tiatn shifter represents one of the greatest threats and promises for humanity. With intelligence rivaling or even exceeding an experienced soldier, they are vastly more difficult to kill and casualties during these encounters often spike dramatically. Titan shifters can transform when a wound draws blood (often self-inflicted), making detainment and concealment crucial while they are still safely in human form. Know your enemy, even if you don't understand it, and we can prevail!

Adequate information does not currently exist concerning four documented Titan Shifters not on this list: Marcel, Uri Reiss, Mr. Reiss, and The First King. For the remainder of known specimens with adequate documentation, here is what we know.

Anatomy: With a lean, muscular, and more human-like build, Eren possesses the strength and will to kill most Titan enemies. Pointed ears and a lipless mouth exposing his teeth also differentiate him.

Personality: Caring, compassionate, and later, disillusioned. A notable change in Frieda's personality was observed after she received the coordinate.

Anatomy: With light-colored, shoulder-length hair, large eyes filled with dark loops, and a skeletal nose, she had a defined muscular structure similar to the Female Titan.

Personality: Passionate, duty-driven, and kind-hearted. This irony perhaps provides insight into his motivation against humanity, which is yet unclear.

Anatomy: True to the name, the Armored Titan has hardened plates of thick, yellow-golden skin all over its body that acts as armor. Although, weak points on the backs of the joints and corners of his lipless mouth are vulnerable to attack.

Anatomy: The Female Titan is unusually fit and strong, with exposed muscle and tissue.

Personality: Mysterious, guarded, and critical. It is believed she possesses closely guarded knowledge concerning the true nature of Titans and human history.

Anatomy: The smallest Titan shifter yet identified, she has a larger head, mouth of all the canines, long, black hair, and a chimpanzee-like body with long arms and sharp claws.

Over 100 years ago when the Titans first attacked, humanity teetered on the brink of extinction. The First King, a Titan Shifter of great power, possessed the power of the Coordinate, Instead of wiping out the Titans, he chose to contain humanity behind the walls, believing that a world ruled by Titans created true peace. Utilizing his ability to control the Titans with the power of the Coordinate, he caused of Titans to harden their skin, creating the Wall Maria, Wall Rose, and Wall Sina.

That's a lot of Titans! We hope that these two infographics have gotten you even more excited about the upcoming Attack on Titan movie and future seasons of the show. We also have a killer set of exclusive Attack on Titan costumes, including Mikasa and Eren, so you know you'll have an outfit to cosplay in when you're screening the film. (Good luck actually killing a Titan for real, though.)