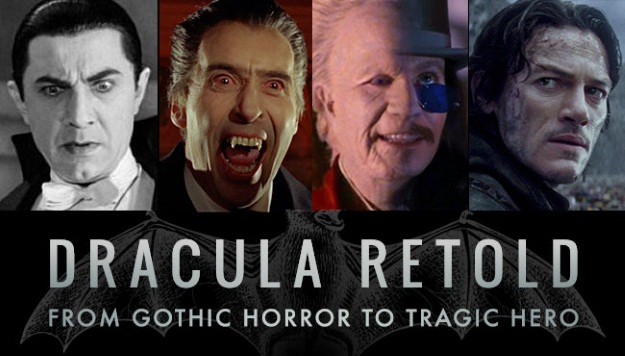 Dracula Untold, which stars Luke Evans (The Hobbit: The Desolation of Smaug) as the legendary vampire, makes a hero out of the classic villain. Being reimagined is nothing new for the character, who has been depicted as everything from a gothic bloodsucker to a hopeless romantic. Every actor brings something new to the role, but perhaps none have made as much of an impact on Dracula as Bram Stoker did when first writing the character.

Since the novel Dracula was first written, it has been adapted to countless films, but it has also inspired a number of related characters. Count Dracula has been repurposed for everything from a chocolate-loving cereal aficionado to a numbers-obsessed Muppet. Here are some of the most famous versions of this storied vampire:

From the birth of historical figure Vlad the Impaler to and Bram Stoker's seminal novel to modern-day film fiction, the legend of Dracula has grown and evolved with each iteration of the character. His story has been told and retold for hundreds of years, proving that the vampire Dracula is truly immortal.

The namesake for Bram Stoker's villain, Vlad III Dracula earned the nickname "The Impaler" for his particularly barbaric treatment of his enemies. Some adaptations of the story have explicitly stated that Vlad and the fictional Dracula are one and the same.

Irish author Bram Stoker envisioned the appearance of his close personal friend, Victorian actor Sir Henry Irving, when writing the character of Dracula. The author drew inspiration from historical vampire myths and legends for his story.

F.W. Murnau's Nosferatu is the oldest surviving film version of the story, but it, too, was almost lost. Changing the characters' names wasn't enough to avoid conflict with Stoker's estate, and all prints were ordered to be destroyed. Max Schreck starred as Orlock, a monstrous creature with rodent-like qualities.

Hungarian actor Béla Lugosi's caped, aristocratic version of Count Dracula continues to be the most widely imitated permutation of the character. Universal's Dracula was an adaptation of stage play based on the novel. Lugosi only officially played Dracula in one additional film.

One of the earliest examples of a Turkish horror film, Dracula in Istanbul was the first to feature Dracula with fanged canine teeth. It also established a literal connection between the villain, played by Atif Kaptan, and the historical Vlad the Impaler.

The iconic vampire fangs were popularized by Hammer Films' Dracula franchise, which drew inspiration from Universal's Dracula and other earlier adaptations. British actor Christopher Lee portrayed a well-spoken and finely-dressed Count and went on to play the character more times than any other actor.

Although it was not a Hammer film, Christopher Lee reprised his role in Count Dracula, the first film to depict the vampire regaining his youth by drinking blood. This detail and the character's mustache are elements from Stoker's novel often ignored by other adaptations.

The first attempt to depict the count sympathetically came in the 1973 television adaptation of Stoker's story starring Jack Palance. Dan Curtis, creator of the Dark Shadows series, adapted the show's story of a vampire's loved one being reincarnated for this version of Dracula.

Frank Langella starred in this 1979 version of Dracula, and his portrayal of the vampire was more enigmatic and seductive than ever before. Like Universal's 1931 film, this adaptation was based on Hamilton Deane and John L. Balderston's stage play and was focused on the more romantic elements of the story.

Director Francis Ford Coppola attempted to create the most faithful adaptation possible, but added an introduction with Vlad becoming the vampire and also utilized the reincarnation love story. Gary Oldman portrayed Dracula both as an ancient vampire and with his youth restored.

Dracula Untold stars Luke Evans as Vlad, the man who will become Dracula. This origin story focuses entirely on the character's fictional transformation from man to legendary vampire. The first in a potential reboot for all of Universal's monster films, This update looks to recreate a historically accurate 15th-century setting.

Sources: Dracula in the Dark: The Dracula Film Adaptations, In Search of Dracula: The History of Dracula and Vampires, Mondo Macabro: Weird and Wonderful Cinema Around the World, Screen Rant, Who Was Dracula?: Bram Stoker's Trail of Blood

Dracula Untold premieres in U.S. theaters on Friday, October 10th. Will this origin story earn box office praises, or will it "suck?" Bring Dracula back to life this Halloween by shopping for all things vampire here!

Jimm is a web developer for HalloweenCostumes.com by day and a Halloween and horror enthusiast by night. When he's not writing for his own blog and ours, he spends his time with his wife and his brother, watches Ghostbusters for the millionth time, and dresses his dog Bela (named for Lugosi, not Twilight) in various costumes. He studied film in college, but uses that knowledge to analyze lowbrow schlock like Killer Klowns from Outer Space.