Leatherface: Man of Many Faces [Infographic] 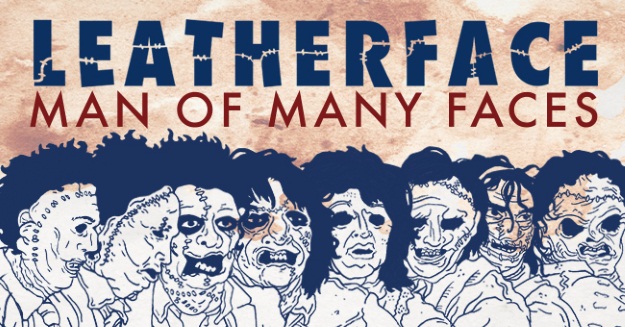 The Texas Chain Saw Massacre was first released forty years ago in 1974. What nobody knew at the time was just how influential the independent film with a miniscule budget would be, or what lasting effects it would have on the horror genre. The original was followed by six other films in the Texas Chainsaw series, and it inspired countless imitators. Of all the slasher icons, Leatherface is possibly the most recognizable - regardless of whose face he's wearing.

In honor of his 40th birthday, we revisited each film in the franchise, researched the details of their production, and meticulously scrutinized which kills should or should not be credited to Leatherface. Over forty years and seven movies, Leatherface and his family have gone through a surprising number of changes. Rev up your chainsaw, sharpen your meathooks, and get out your sewing kit...we're celebrating the 40th Anniversary of the Texas Chainsaw Massacre with a visual guide dedicated to Leatherface: the man of many faces.

Leatherface: Man of Many Faces Transcript

One of the most bizarre film franchises in the annals of American horror, The Texas Chainsaw Massacre began 40 years ago with the tragic account of five youths who fell into the murderous snares of Leatherface and his cannibalistic family. The series has had a very, very long life, each entry full of the mad and macabre. These seven films spanning four decades are anything but an idyllic summer afternoon drive through Texas... The Saw Is Family

Inspired by real-life serial killer Ed Gein, filmmaker Tobe Hooper inadvertently helped establish the slasher horror subgenre with his classic 1974 film. A murderous clan of Texans, including the iconic Leatherface, slaughter a group of unsuspecting youths who just happen to be in the wrong place at the wrong time.

More than a decade after the release of the original, Hooper returned to the direct Part 2. Inspired equally as much by the other slasher franchises as by the first TCM, the sequel is a tongue-in-cheek take on the state of the horror genre, and the 1989s in general. Chili, anyone?

New Line revived Leatherface and the TCM franchise in 1990. With vague and passing references to the earlier entries, the third film creates its own continuity with an updated, modern style. Like many horror films of this era, this was brutally hacked and slashed by the MPAA.

Texas Chainsaw Massacre: The Next Generation

Leatherface played by Originally titled The Return of the Texas Chainsaw Massacre, the fourth installment was intended as a direct sequel to the first film and directed by Kim Henkel, co-writer of the original. The reason for the family's madness is revealed: they are simply pawns in a government conspiracy.

The TCM series was ahead of the remake curve with the 2003 Platinum Dunes film. Recreating the look and feel of the original, the remake paints Leatherface as a sympathetic character. His family, on the other hand, is more sadistic here than they ever have been before.

The Texas Chainsaw Massacre: The Beginning

Hot off the success of the remake, the prequel established the origins of Leatherface and the Hewitt family. From his birth to the creation of his first skin mask, we see the torment and abuse that shaped and created the iconic character (and the torment and abuse he would inflict in turn).

The most recent attempt to reboot the franchise - Texas Chainsaw 3D - picks up immediately where the first TCM left off. With Leatherface and his family believed to be dead, Heather returns home to discover that the bloodline is not yet completely severed.

Where will Leatherface and his family go in the next forty years? Nobody can say for sure, but he'll certainly be taking his trusty chainsaw along with him. If you're looking to inspire some terror of your own this Halloween, we have Texas Chainsaw Massacre costumes for both children and adults. We also carry animated chainsaw accessories, of course... the saw is family!

Jimm is a web developer for HalloweenCostumes.com by day and a Halloween and horror enthusiast by night. When he's not writing for his own blog and ours, he spends his time with his wife and his brother, watches Ghostbusters for the millionth time, and dresses his dog Bela (named for Lugosi, not Twilight) in various costumes. He studied film in college, but uses that knowledge to analyze lowbrow schlock like Killer Klowns from Outer Space.