From Zombies to chainsaw-crazy killers, some of the most recent horror films have exposed the scariest slayers on the big screen. Some have resurfaced in remakes, and some are brand new and more gruesome than ever.
Here is our list of Top 10 Horror Film Killers of the 21st Century…

10. 30 Days of Night: Marlow
Vampires have clearly risen in popularity in recent years, and this 2007 flick helped kick-off the trend. With blood thirsty creatures and 30 days of darkness to haunt Alaskans, Marlow (Danny Houston) leads his team of vampires on a killing spree.

9. 28 Days Later: Virus to Zombies
What could be worse than a murderer you can’t kill…or see? Survivors of the virus attempt to salvage what little they have, realize the virus isn’t the only thing to fear. When a lethal virus spreads across the UK turning humans into hungry-for-flesh zombies, no one is safe.

8. The Ring: Samara
Telephone rings have never been more frightening. This choice was a tough call (no pun intended). Samara isn’t a killer per se, but it is her curse and tragedy that befalls the unlucky. When an urban legend says a cursed videotape will kill whoever watches it after 7 days, an intrigued journalist is in a race against time to save herself and her son.

7. Jeepers Creepers: The Creeper
Two siblings are on their way back from college, and surprise! A flesh eating creature emerges from a…church basement?  Pursuing the youngsters, this monster needs to eat humans in order to regenerate his own body parts, and he sees something he wants!

6. Zombieland: Tallahassee
Ok, Ok… So he isn’t a “villain.” But Tallahassee is one bad ass zombie slayer! Equipped with a loaded shot-gun and a quit-wit, Woody Harrelson kept us laughing and killed hundreds of zombies while searching for the last Twinkie on the planet.

4. A Nightmare on Elm Street: Freddy Krueger
Ah the original nightmare himself! Freddy (Jackie Earle Haley) is back again, bladed and ready for revenge.  The dream weaver has kept horror film junkies coming back for more since 1984, so we couldn’t help but put him on our list!

3. Texas Chainsaw Massacre: Leatherface
Our favorite chainsaw slinging scoundrel is up for round two! The 1974 hit made its second appearance in 2003, and Leatherface scared the pants off of movie goers once again. Only trying to feed his cannibalistic family, the madman finds a group of teenagers off the beaten path and the chase begins!

2. Hostel: Elite Hunting
Hostel’s villains are some of the most twisted yet. The film centers around 3 backpackers that are sold to a sadistic group, Elite Hunting. The murderers aren’t looking for revenge, just crave the kill. Now that is evil.

1. Saw: Jigsaw
After 6 Saw movies and Saw 3D: The Final Chapter, we had to hand the #1 spot to Jigsaw. Now, some may beg to differ because…he has never killed his victims himself. Jigsaw is a mastermind and gives people the choice to save their loved ones and lives they once took for granted, at a price. Game over, congratulations Jigsaw. 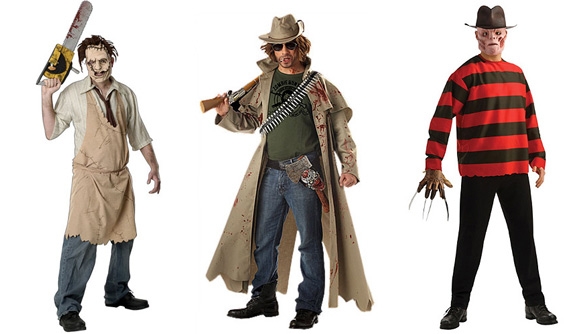