The Halloween custom now called trick-or-treating has its roots in the Middle Ages. Wassailing at Christmas was an early expression of the practice; wassailers would dress up in costumes and go from house to house singing Christmas carols, and would be given food and drinks by the residents. There was also a custom called “souling,” which originated in Ireland and Britain. Poor people would go from door to door on Hallowmas—November 1, also called All Hallows or All Saints Day—offering to say prayers for the souls of dead loved-ones on All Souls Day (November 2) in return for food.  Trick-or-treating has become a widespread custom in English-speaking countries.

The very name of Halloween derives from "Hallowmas". In ancient times the celebration of most holidays began at sunset of the previous evening—the eve. Christmas Eve and New Year’s Eve are modern examples of the custom. All Saints’  or All Hallows Day, November 1, is a Christian observance on which the faithful remember all of the holy people who have gone before and set a good example for how to live one’s life. The next day, All Souls Day, is a remembrance of departed loved ones.  Halloween is the eve (e’en in archaic spelling) of All Hallows. In Latin America it is celebrated as Día de los Muertos, Day of the Dead. 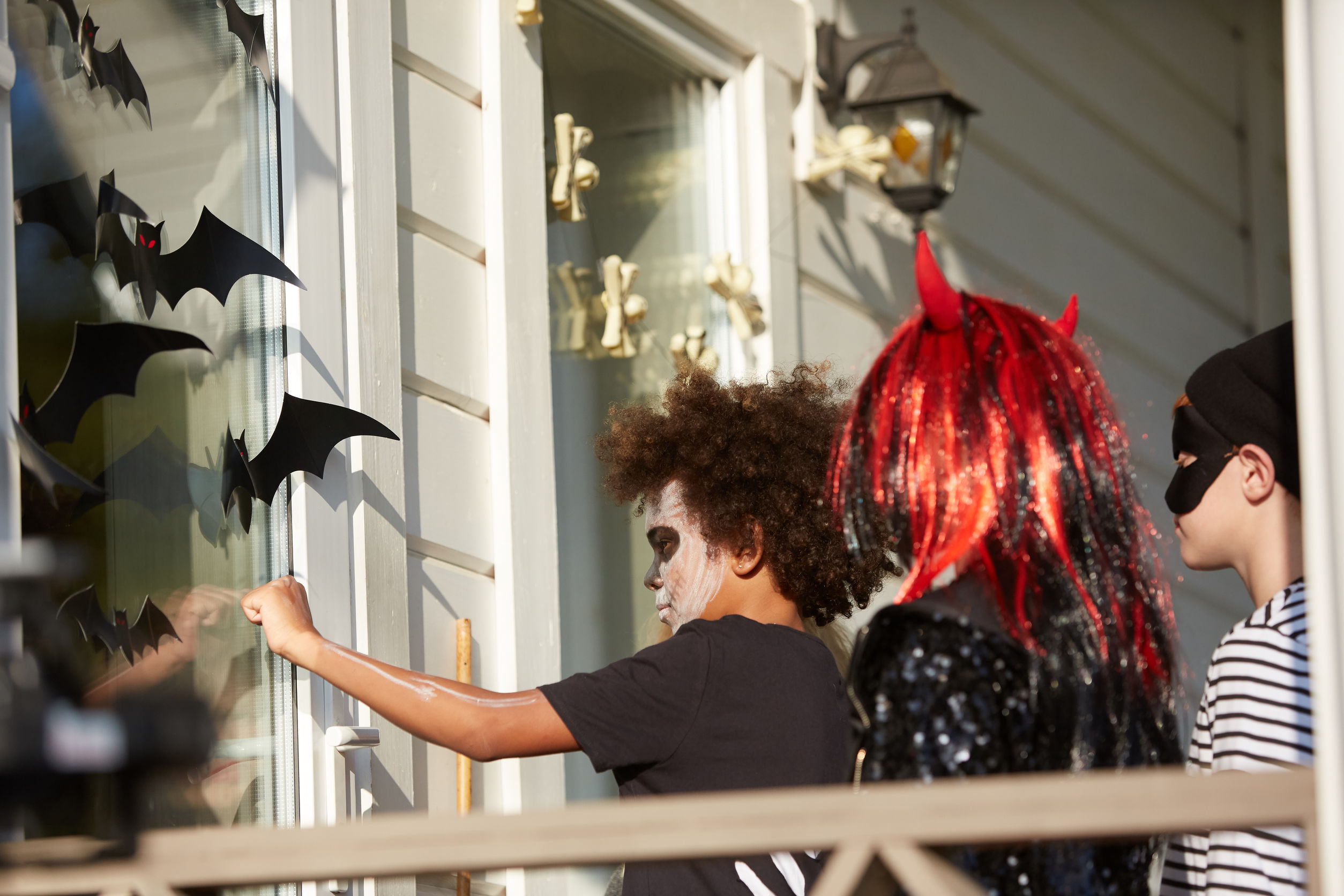 The timing of All Saints and All Souls is not accidental. As Christianity spread across the world, missionaries would often assign a Christian meaning to pre-existing local observances, in order to replace the pagan custom. Christmas, for example, was intended to replace the ancient Roman year-end festival of Saturnalia. Nobody knows for sure exactly when Jesus Christ was born, but most scholars think it was probably in springtime rather than midwinter. But the Romans were accustomed to have a festival, and it couldn’t be stopped. So early Christian leaders decided it would be a good time to celebrate Christ’s birth.

Halloween, All Saints and All Souls were meant to replace an early Celtic Druid observance celebrating the end of the harvest. Samhain, which meant “summer’s end” in Old Gaelic, fell on the full moon at the midpoint between the fall equinox and the winter solstice. It marked the beginning of what the Celts called the “dark half” of the year. The Irish kings would hold feasts and assemblies at Samhain, and stories were told as entertainment. All Saints was established as a Christian holy day and associated with Samhain by the early years of the eighth century.

The association of evil spirits with Samhain and, later, All Hallows, began with a story from Irish mythology which dates to the seventh century. An Irish king set a test of bravery for his soldiers during a Samhain festival, with the prize for success to be a gold-hilted sword belonging to the king.  The terms of the test were that a man must leave the safety and warmth of the festival hall at night –when evil spirits were thought to be abroad at any time of the year—and go to a gallows where two prisoners had been hanged on the previous day. He must then tie a twig to the ankle of one of the hanged prisoners and return to the hall. Many men attempted the test but failed and returned in shame. They reported that they could not complete the test because of harassment by demons and spirits. One hero named Nera is able to complete the task; he then has a vision in which the king’s hall is destroyed. He returns to the hall to warn of the destruction, and is rewarded with the sword.

The custom of dressing in costumes at All Hallows originated in Scotland, where young men would impersonate the dead by dressing in white and painting or masking their faces. The intent was to appease evil spirits by imitating them. 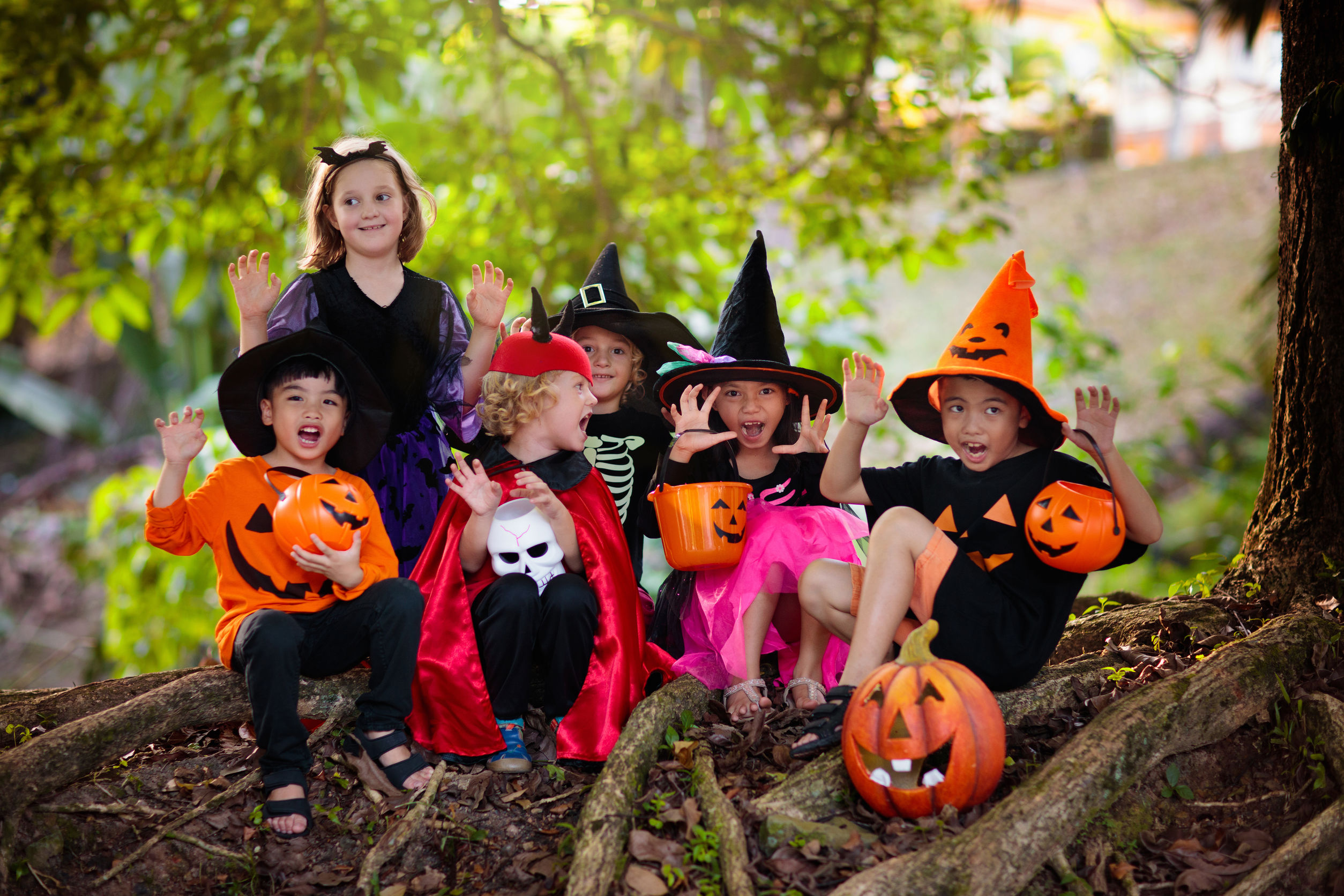 The earliest documented practice that resembles modern-day trick-or-treating dates to 1895 in Scotland and 1911 in North America. The custom was called “Guising;” children dressed in costumes visited neighbors and were given treats of food or coins. They carried lanterns made from hollowed-out turnips—the original jack-o-lanterns. The phrase “trick-or-treat” was first used in print in Blackie, Alberta, Canada in 1927, in a newspaper account of youths committing mischief such as overturning barrels, leaving gates unlatched or removing wagon wheels unless given edible treats by homeowners.

By the 1930s trick-or-treating had become widespread in the western United States and Canada, and became a continent-wide phenomenon by the late 1940s. By then the connotation of the phrase had changed from a threat of mischief unless a treat was given, to a promise of reward for performing a “trick” such as singing a song, reciting a poem, doing a dance or telling a joke. 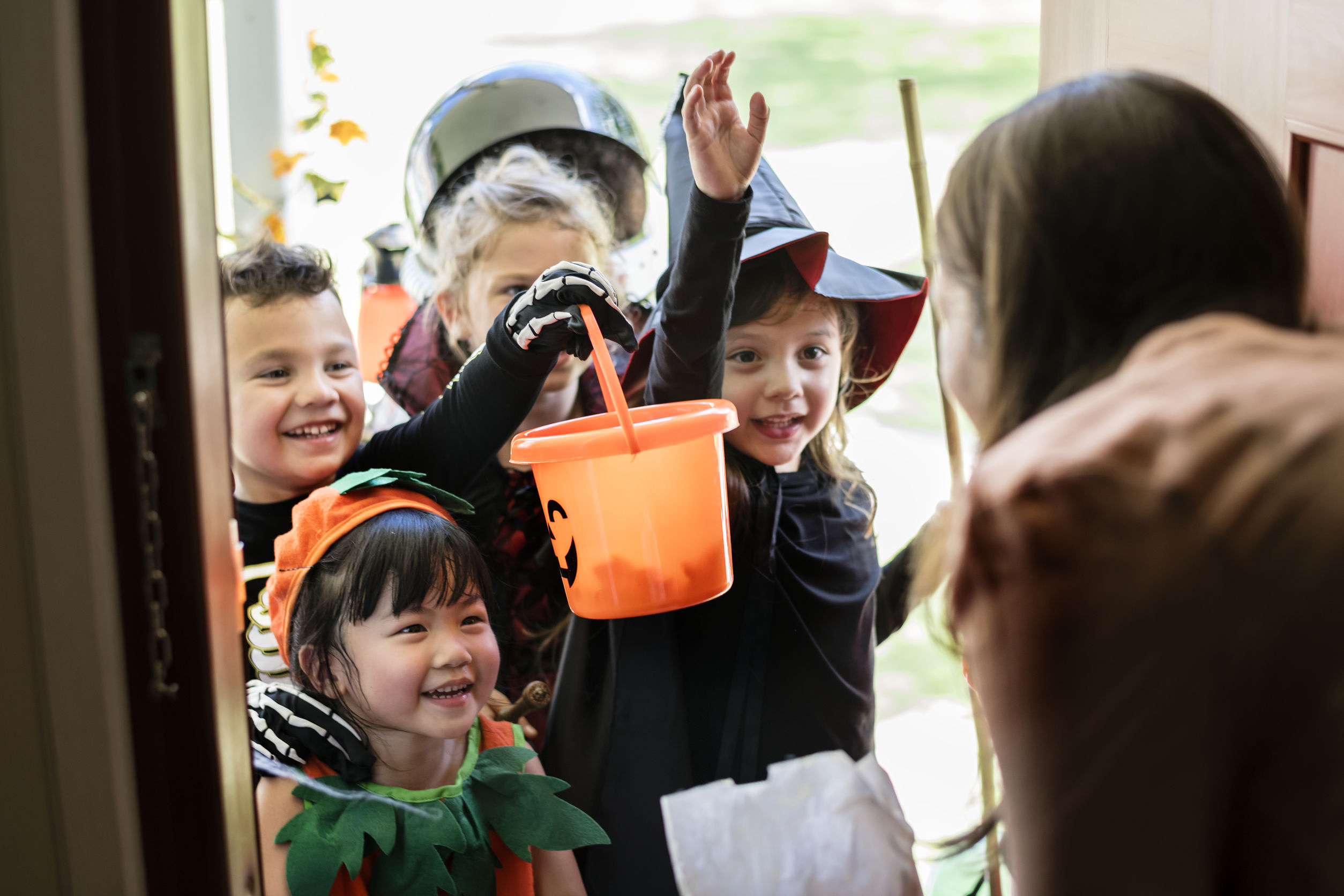 The first appearance of trick-or-treating in entertainment occurred in the late 1940s, with articles in the children’s magazines Jack and Jill and Children’s Activities in 1947, and Halloween-themed episodes of radio dramas such as "The Baby Snooks Show" in 1946 and "The Jack Benny Show" and "The Adventures of Ozzie and Harriet" in 1948. Charles Schulz depicted trick-or-treating in his "Peanuts" comic strip in 1951, and Walt Disney produced a cartoon titled "Trick or Treat" in 1952. Trick-or-treating had arrived, and was now a part of popular culture. The United Nations Children’s Fund, UNICEF, began its national fundraising campaign “Trick or Treat for UNICEF” in 1953.

Since the late years of the twentieth century, many organizations in the US have begun hosting or sponsoring community trick-or-treating events contained in a central location such as a shopping mall, college dormitory or church basement or parking lot. Planners and parents of participants view this as an often-safer and always-easier alternative to walking door-to-door in neighborhoods. Such events are not always held on Halloween itself, but often on the preceding weekend.

As already described, “Guising” has been practiced in the British Isles since the late 1800s, but the phrase “trick-or-treat” was not introduced there until the 1980s. It has come to be commonly used, but many Britons regard it as an over-commercialization of a fun custom. Before the introduction of the phrase “trick-or-treat,” children would say, “Help the Halloween party” or simply “Halloween.” 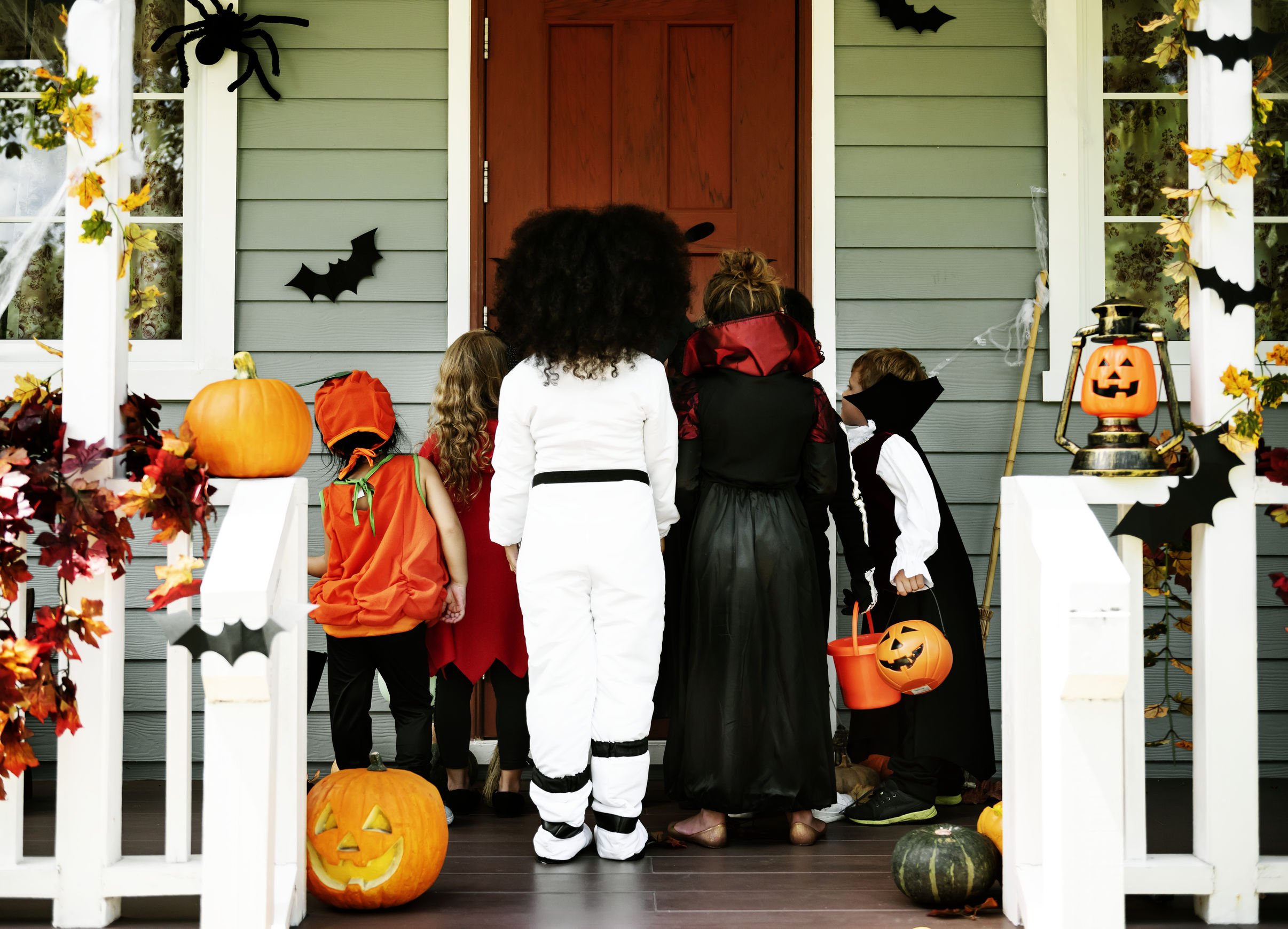 Some non-English-speaking countries have similar traditions, but they occur at other times of the year.  In the Scandinavian countries of Sweden, Denmark and Finland dress as witches or other characters and go from home to home collecting treats during Lent or Eastertide. In German-speaking countries children carry lanterns and collect treats on St. Martin’s Day, November 11th. In some areas of northern Europe there is the tradition of “Rummelpott” in which costumed children collect treats on New Year’s Eve.

If you’re going trick-or-treating this year, whether in your own neighborhood or at an organized event, the first thing you need is a great costume! Popular costume themes for 2012 include monsters of various types, both funny and scary; superheroes, based on such movies as The "Avengers", "Spider-Man" and "The Dark Knight Rises"; vampires, based on the "Twilight Saga" movies; and Disney princesses, most recently Princess Merida from the 2012 movie "Brave". Whatever type of costume you choose, make sure it fits well—you don’t want to be tripping over pants or a dress that are too long. For safety, make sure that any mask you wear has large eye holes so you can see where you’re going. As an alternative to a mask, consider using makeup instead. Professional-grade makeup kits can be purchased that allow you to get movie-style special effects at home! Carry a light with you, either an LED or flashlight; avoid using candles, for safety. You also need a great bag for all of the treats you’ll collect. Your treat bag can be as simple as a recycled grocery-store bag or as elaborate as a plastic pail molded in the shape of a superhero or jack-o-lantern. There are themed bags that match many of the costumes available for sale. 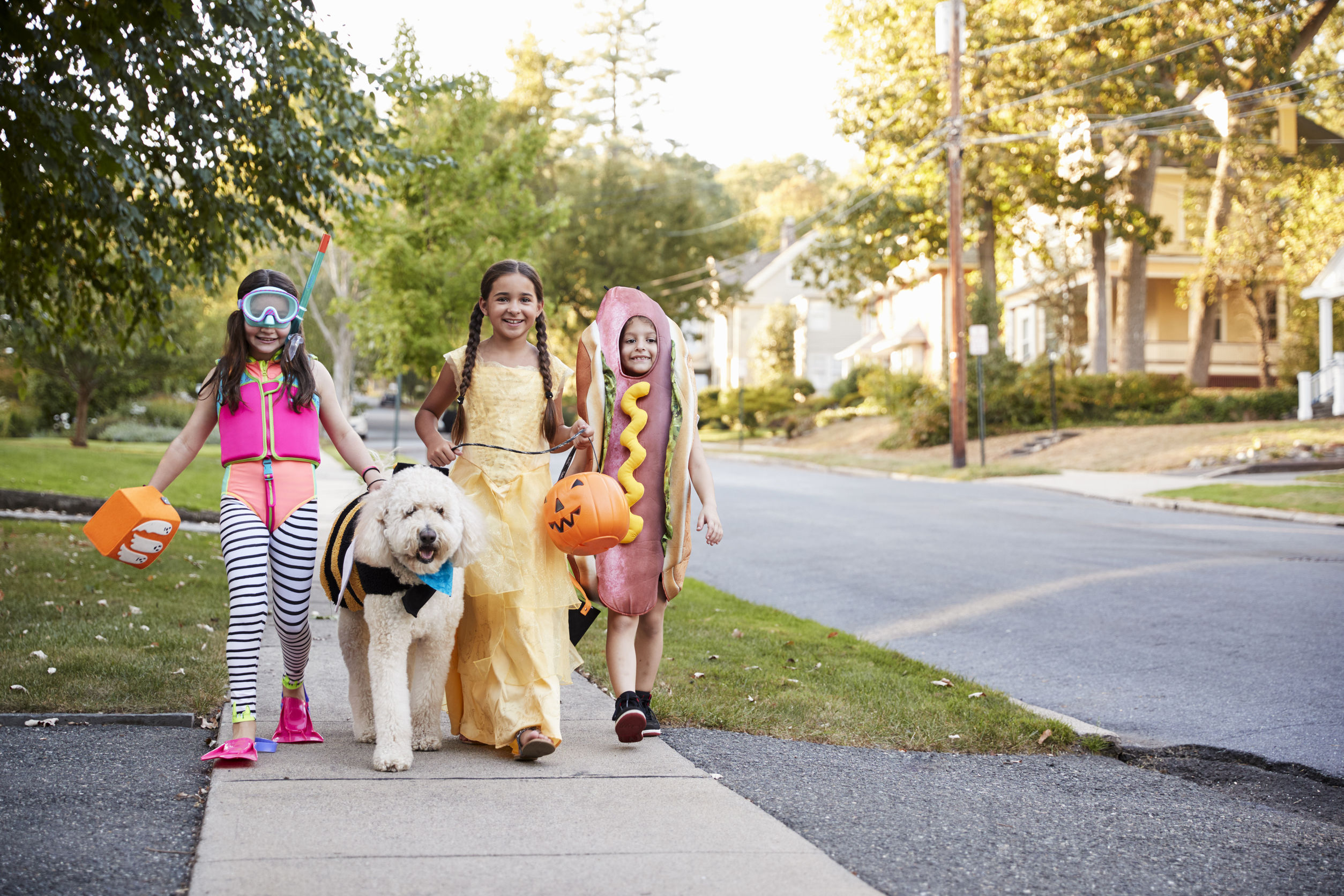 Once you have your costume and your bag, you’re ready to set out. All you need to do then is be safe, and have fun!

Kylie Ahlschwede is a staff writer for HalloweenCostumes.com, where you can get all of the costumes and accessories you need to have a fun and safe time trick-or-treating!