Unique Costume Ideas From The 90s

Are you looking for a Halloween costume that your average college student today wouldn't recognize? You are in luck with these sweet 90s costumes! (Yes, sorry, go ahead and take a moment to acknowledge how long ago the 90s were).

First off, let's talk about the Spice Girls. Between the Olympics and their upcoming musical, they're making a comeback! Do you have four friends? Do you all embrace Girl Power? Then this is the costume set for you. Which of the five will you be? Your choice says a lot about you, so choose wisely! And make sure you bring your best platforms. 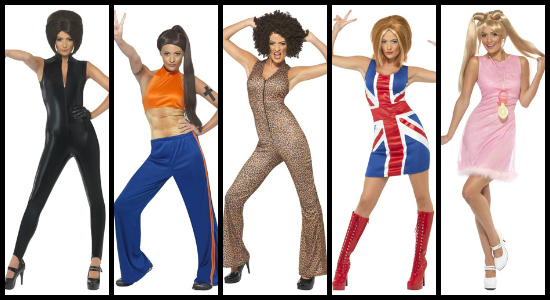 Party on! Just add the T-shirts, flannels, and jeans you've had lying around since the 90s. Don't forget your Wayne's World baseball cap! Find one online, or you can make one with a white paint marker and a plain black cap. 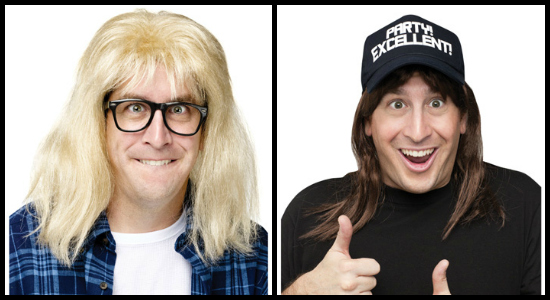 Who's that Spartan in my teepee? It's you! Get ready to bring inappropriate levels of enthusiasm to any Halloween party with these Saturday Night Live Spartans costumes! 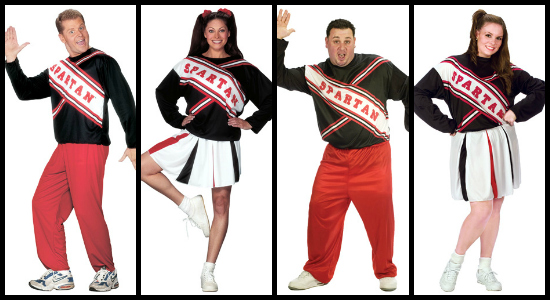 Are Homer and Marge the most famous TV couple? They're definitely the longest running, and now you can bring a little piece of them to your Halloween party. The Homer costume includes a totally creepy mask but does not include donuts or beer, sadly. Marge includes a dress, pearls, and, of course, a huge blue wig. Bring the party with you with this sweet Duffman costume or Sexy Duffwoman 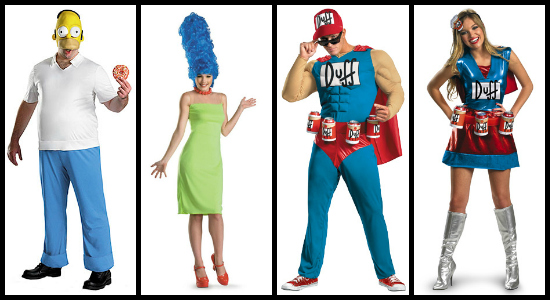 Looking for something classy for this Halloween? How about Harry and Lloyd's sweet blue and orange tuxes? Complete the look with a headless parakeet and a dog-shaped van (for the extremely committed.) 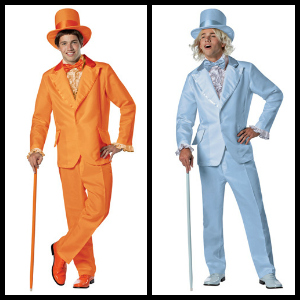 These costumes are great if you have a lot of self-confidence and plan to spend Halloween in a warm climate. Be careful, though, because they're so realistic you might be called upon if there's a crisis at sea! 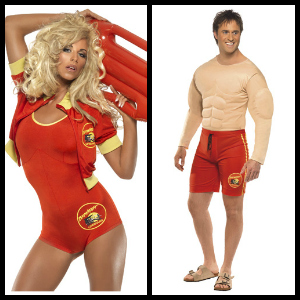 Go go Power Rangers! Do do do do do doooo, yeah, you know that's going to be in your head for awhile. If you are the coolest guy in school you should be the Red Ranger for Halloween. If you are the prettiest girl in school you should be the Pink Ranger. End of story. These costumes are also useful in cold climates because you can fit a whole snowsuit under them. 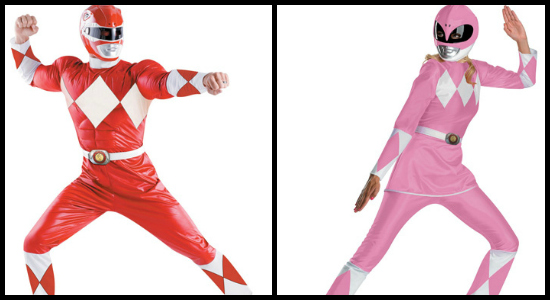 You wanna be a color-colored superhero for Halloween, but not a Power Ranger? How about something more reptilian? Look no further than the Teenage Mutant Ninja Turtles! This costume idea can be as involved or as low-key as you'd like. Not really feeling Halloween, but want something vaguely costumey? How about a Ninja Turtle T-Shirt? Or, if you are looking for something a little more flashy, why not try a Ninja Turtle dress? Complete those looks with a turtle shell backpack  or the Ninja Accessory Kit!  If you're not shy about committing to the Ninja Turtles, there are also full-on turtle costumes available. 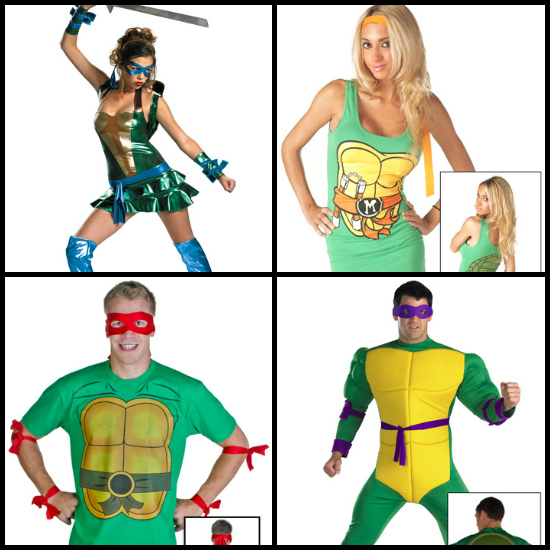 Wait, where did that Waldo costume go? I swear it was just here. Oh well, I imagine it'll turn up sooner or later. If you know a girl with a red trench coat and hat, Carmen San Diego can be your date! 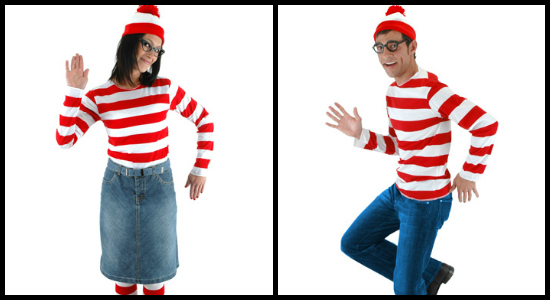 Can't muster a lot of enthusiasm for Halloween? That's fine, neither can Daria Morgendorffer. Actually, she has trouble mustering enthusiasm for most things. Pair some of our black combat boots with a red blazer and black bob wig and go as Jane Lane for a great group costume for two. 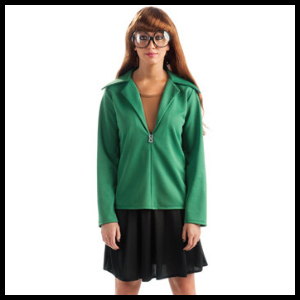 How to Dress 90s-Style

If you're going to a 90s party or another decade-themed bash, you might be looking for ways to replicate the aesthetic without picking a 90s character costume. Here are a few tips and tricks to get your 90s outfit to look hella fly.

Unlike the hair of the 80s, there’s no need for big, poufy dos a decade later.  Instead, you’re going to want to do just the opposite.  Make it sleek.  Did Rachel have any frizz?  No, and neither should you.  If you want to make your look stellar, don’t forget to add highlights that greatly contrast with your natural hair color.  Sure, the side pony was still pretty big, but you can take it further.  Try getting your hands on some of those FABULOUS headbands and don’t neglect your fringe bangs.

Who were the coolest guys of the 90s?  The ones who had their hair bleached and their tips frosted.  But maybe you don’t want to relive being that cool at this party, so go ahead and curtain your hair or, if you’re preppy (and you’ve got the length), pull it back into a small pony tail.  Better yet – go for the rattail.

First of all, those jeans really did make everyone’s rear end look like a mom’s, so don’t expect yours to be any different…especially a decade later.  If you’ve got overalls, pull them on (and don’t forget to unhook one of the straps and throw it behind you.  So cool.)  The later part of the decade brought back low rise flare jeans, and if you can, find some with lovely embroidery, lace up fronts, or those that are plaid.

You’ve got a LOT of options here.  Ladies: depending on the look you’re going for, an over-sized t-shirt can be perfect.  Just make sure that the brand or logo that’s on it complies with the decade.  Tight muscle tanks were a big deal, as well as tube tops, and anything that shows your midriff.  And if you want to be grunge, that’s perfectly fine.  Just throw a flannel over your super cool tee.  You’re a total rebel.  Guys:  those sweaters are ready to come out of your closet – the ones with, like, a billion neon colors.  Go ahead and wear a classy matching button up too.  Or, just a really big shirt with vertical stripes.  In subdued hues.  That look like vomit.  Have more than one shirt you really want to wear?  Uh, you can wear them both!  Just tie one around your waist, duh.

Those Skirts and Dresses

If you thought the dresses were rocking in the 90s, you best take another glance at your yearbook.  Ill-fitting baby dolls in bad floral patterns and tartan miniskirts aren’t the easiest things to make look chic, but boy, are they comfortable, which is exactly what the 90s were all about.

If you’re adhering to the grunge look, go for some cool doc martins or your basic converse sneaks.  If you’re not planning on spending the evening worshiping Kurt Cobain, wear shoes that are pretty plain and in ugly, boring colors.  The women’s shoes of the 90s were nothing shy of fabulous.  Get ready for chunky, strappy heels, clogs, jellies, and those super cute platform sandals that have one huge strap across the top in a bright solid color.  Don’t feel like getting all dolled up?  Just wear some platform Sketchers with your ensemble.

Spritz yourself with some CK One and get ready to complete your look.  Hats were pretty big back in the day, so see if you can find a totally cool bucket hat, sun hat, or baseball cap (which has to be worn backwards).  Finish by slapping on some bracelets, putting in some hoop earrings, grabbing your mini backpack, and getting your Spice Girls CD (or tape) ready to go.

Now that you're all caught up on the 90s outfit ideas, you can coordinate some of these tips with your favorite 90s costumes! What is your favorite part about the 90s? Did you enjoy the Saturday morning cartoons? Were you more of a fan of the 90s boy bands? Feel free to let us know about your 90s expertise and favorites in the comments below.

Renata Sancken is a staff writer for HalloweenCostumes.com. This fall she will be kickin' it old-school with a 90s throwback costume from one of her favorite MTV shows.