Horror Scopes: A Fusion of Fate and Fright [Infographic] 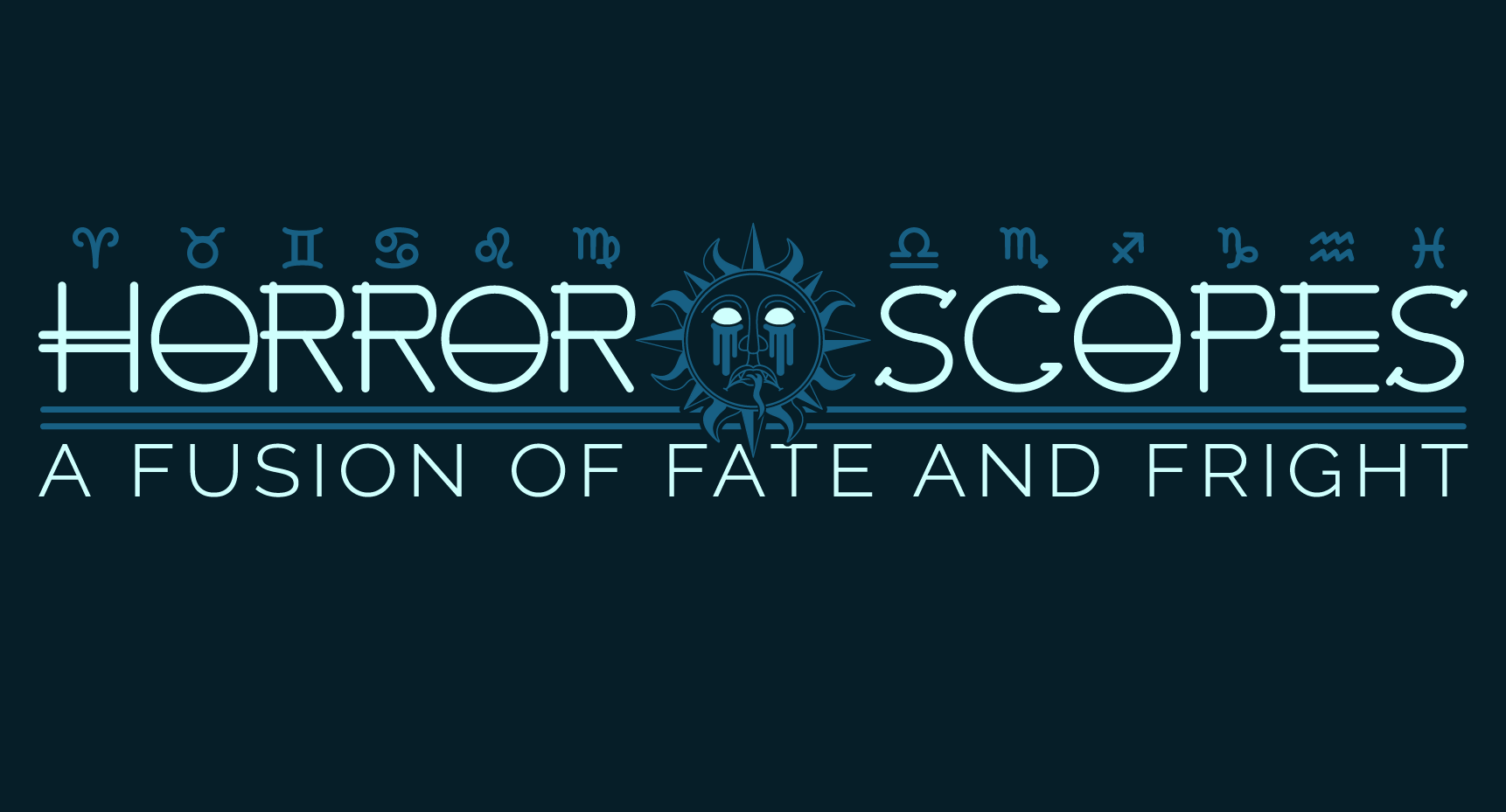 Mercury isn’t in retrograde right now but mischief and mayhem are certainly written in the stars this Halloween. For each zodiac sign, the ‘Horror-Scope’ fuses a cosmic revelation with a creepy character to shed light on your fate this fall season. Will a Gemini miss their other half at the spooky soiree and can a Leo resist being the center of attention during the costume contest? Through the alignment of the planets and insight into the psyche of the most sinister villains, each star sign reveals likes and dislikes, personality traits and advice for navigating the eeriest month of the year. Beware: celestial scares are ahead and blaming Mercury for your frightened state won’t save you this time.

Horror Scopes: A Fusion of Fate and Fright Transcript

As the first sign of the zodiac, you're a fearless leader. Just like Black Phillip, you're unafraid to lead that passion project you've been dreaming about.  Maybe you're using your frank persuasive nature to convince a newly orphaned girl to sign your book and live life deliciously. Or perhaps you're leading a family of Puritans astray so that your followers will finally have the power of flight. Either way, once you put your mind to a task, your personality ensures that success will be in the grasp of your hooves in no time!

Taurus, you truly possess the spirit of Halloween, or rather, the spirit of Halloween truly possesses you. Taurus' entire aura centers on devotion to their passion, whether it be a person or a hobby. Plus, those born under this zodiac sign are never afraid of a challenge. In Valak's case, the insidious demon disguises itself as a nun in an attempt to corrupt the most devout souls. Now, that's a challenge! When faced with adversity, a Taurus smiles back sinisterly and accepts it with open arms.

Those born under this air sign, prepare to float on air this Halloween. A Gemini's twisted twin flame is Pennywise the Dancing Clown because they both have an innate wisdom and powerful instincts. A Gemini's ability to manipulate any situation for their personal benefit is similar to the demonic clown's ability to morph into any person, animal or object. Through charismatic interaction and unrefined magnetism, both parties possess irresistible qualities, rendering others powerless. It's plain to see, people are drawn to you the way children are drawn to a shiny, red balloon.

Cancer: The Other Mother (Beldam)

Likes: serving up a good meal, home-based arts such as gardening and doll making

You let your emotions guide you, Cancer. Like The Other Mother from Coraline, you can be sweet but once someone is rude to you, you can't help but get prickly. Once you find someone you want in your life they need to commit to the buttons-for-eyes lifestyle or pay for their rude ways! You give and give, why shouldn't you expect the same in return?

A natural-born leader, Leo reign supreme in October. Inherently passionate and ambitious, witnessing a Leo achieve success is like seeing magic happen. Once a Leo feels determined, an ability to manifest their desires into fruition is similar to witnessing telekinetic powers, like those displayed by Carrie White. When Carrie finally uncovers her extraordinary gifts, she becomes an unstoppable force, just like those born under this fire sign. Prone to hotheadedness, Leos have the tendency to become enraged, so angering one is like being surrounded by flames.

Virgo, your systematic approach to life leaves little room for surprises, even on a day dedicated to disguises and deception. You're a meticulous planner prone to methodical thinking, so American Horror Story's Rubber Man is your star sign's soul mate. Rubber Man's sinful schemes are underway once he's dressed in the infamous latex suit, plotting one logical move after the other, culminating in horrific events. Your Halloween plans will be just as organized and premeditate, and perhaps, just as sinister.

Libra, the scales of justice are tipping in your favor on October 31st. On a constant chase for equality, it isn't puzzling to see why Libra's core traits best match with the calculated moves of The Jigsaw Killer. Both are big supporters of the truth and will go to great lengths to shed light on it. Using games and tests, Jigsaw's deadly challenges and lethal booby traps are meant to enforce a person's will to live. This is akin to Libra's deep need to enrich the lives of those around them, except one involves torture devices while the other involves verbal guidance.

You're a mystery, Scorpio. much like the Crooked Man, no one knows where you're coming from or what you'll do next. You don't follow a formula. While other horror characters vanish when the light goes on, your assertive nature allows you to keep the terror rolling. Pluto, the planet of transformation, rules your temperament. It's no wonder that your character allows you to adapt to different situations, letting you pop up when you're least expected.

Dislikes: being constrained, getting caught red-handed

Sag, your philosophical views on the world tend to be refreshing, although a little bit strange at times. Like Dr. Hannibal Lecter, you study people and places meticulously before deciding on the best course of action in order to get your way. Your impulsivity and desire to travel will culminate in an eventful Halloween, full of excitement and scares. Your spontaneous personality lends itself to meeting new friends and experiencing new things; even if it means eating human flesh for the first time with a psychiatrist you just met.

Dislikes: just about anything sooner or later

Tradition and family are everything to you, Capricorn. It's that trait that ties you to the iconic killer, Leatherface. Like Leatherface, you're the type of person who's not going to stand by while proud family traditions die out, no matter how many tourists you have to hunt down. And because of your responsible nature, you're not going to let resources go to waste. That's the Leatherface way, from the material for his handmade masks to the ingredients for the famous Sawyer chili, all the fruits of Leatherface's labor go to helping the family.

Likes: activities with friends such as drawing or movies, phone calls

Samara, like all Aquarius, acts without prejudice. Why someone watched her cursed film doesn't matter, she's coming for them. As with all people born under these stars, it takes time for her to get to know people...seven days, actually. As an air element, this sign has an amazing ability to adapt, crawling through televisions even after the screens have been unplugged. With emotions as deep as a cursed well, you might seem aloof, but once people are in your sights, they'll find it hard to get away from you!

Pisces: Under the Skin Alien

You're far from shy, Pisces. You're so friendly that new people are always coming your way. That's why you and the alien from Under the Skin have a special bond. We can totally see you thriving as an extraterrestrial that drives around harvesting solo, human men. This mysterious creature embraces the faithful nature of the Pisces, remaining focused on her mission even if weak human emotions might weaken her resolve.

Hopefully, you're not full of inspiration from reading all about your star-aligned sinner this spooky season. Goosebumps are the only thing we want these characters to inspire. But still, it's always healthy to stay in touch with the dark side the cosmos handed to you at birth. Now you can strive extra hard to use your fated persona for the greater good. Try leading a game of kickball instead of leading a coven to violent acts. Knit mittens for your mom instead of sewing inhumane, nightmare masks. See, it's not that hard!

Did you like your perilous Horror-Scope pal? Want to see what your friends think of your new-found connection to an infamous Hollywood fiend? Feel free to share this on the social media platform of your choice or leave a comment below. While we're no planetary experts, we hope we at least gave you an excuse to curl up and rewatch your Horror-Scope companion in action. Get your popcorn, blanket, and your favorite horror movie costume ready, but don't blame us if you get nightmares later!