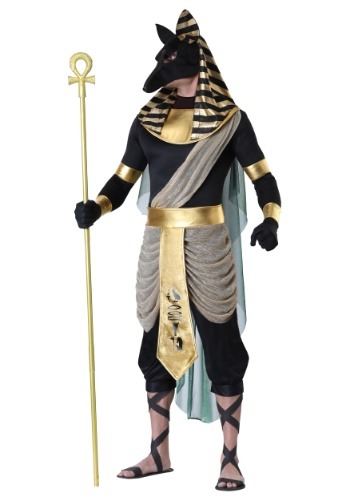 Ancient Egypt had plenty of gods to look up to. There was Renpet, the goddess of time. Priests revered Heka, a god of magic and medicine. Then, of course, there were upwards of a dozen death deities. Death was super complicated in Ancient Egypt. There were multiple gods and goddesses that were there simply to escort the dead to the lord of the underworld. Then there were the deities that were in charge of the different aspects of mummification. Anubis was the head honcho of this department. He was in charge of weighing a souls heart, which was the main deciding factor that let souls pass enter the realm of the dead. We wouldn't let our dogs near so many raw hearts but maybe god dogs have more self-restraint than your everyday Fido.

This Anubis costume is Made-By-Us, meaning our company designers researched this god's look to put together a unique take on Anubis's aesthetic. The tight black shirt is has attached golden cuffs,a layered belt, and making anyone wearing this costume look like they could have been painted on an ancient tomb. With uniquely shaped pants and lightweight gauze draped throughout the costume, you'll feel comfortable moving throughout a costumed event. The ensemble is topped off with a mask and showstopping jackal headpiece with striking gold and black accents.

Curse of the Canine

When it comes to raiding tombs, there's no way we'd want to cross Anubis! This hound will not hesitate to protect the mummies in its care just like a Doberman Pincher might protect its master. Although instead of a bite, this dog will serve up a curse. No wonder ancient Egyptian priests showed this god so much respect. This Halloween, become the loyal guardian of the dead with this showstopping Anubis costume!