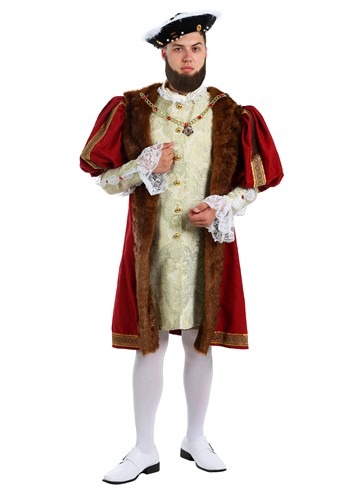 Had the term “baller” existed during King Henry VIII's reign, it definitely would have been applied to him. We're talking about a guy who decided that he didn't like the church's rules, so he made his own church. We're talking about a guy who walked around wearing jewels on his fingers, around his neck and let's not forget that he had owned more property than a real estate tycoon in New York City. He spent his mornings hunting instead of working and he spent his nights gambling and playing cards. He could shred the lute like a boss and he even wrote a best-selling book of his time. Of course...a few of his wives ended up being executed, so not everything he did was totally awesome, but maybe with a little help from you, and this King Henry costume, you can rewrite history!

Being a baller from the 16th century starts with kingly regalia and this costume delivers. It's with a tunic and jacket combination that's designed to make you look like English royalty, since the tunic has a floral pattern and the jacket has pronounced shoulders, gold trim and faux fur. The stockings give the appropriate look of the time, since those were totally cool back then. The hat mimics the one worn by the king, since he wasn't a fan of wearing a crown when it cramped his style. Of course, no 16th century baller costume is complete without a neck chain, which this costume also includes.

Yes, you'll be rolling in style like a king when you wear this outfit. You may even catch the eye of a young Anne Boleyn when you head to the party wearing this stylish costume.