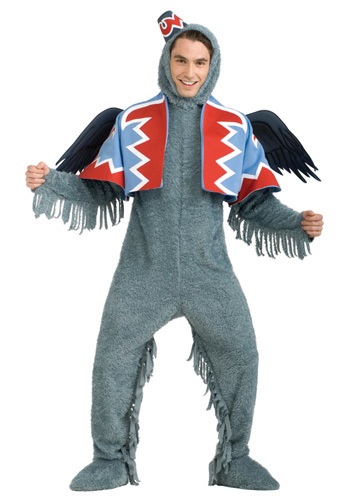 Let’s all just tell it like it is: the ability to fly totally multiplies the cool factor of anything by at least 100. Cars are pretty cool, but flying cars are insanely awesome. Bicycles are sweet, but have you ever seen a flying bike? Amazing, right? The gift of flight turns the ordinary, extraordinary before your very eyes.

Well, the same is true for monkeys. A regular monkey is good--adorable, even (although we’ve seen some nature documentaries in which they are downright terrifying), but a flying monkey is super rad. That’s just a fact. Actually, that’s precisely why the Wicked Witch has an army of them, because when she began training her primate army that couldn't fly, they were just kind of lame. But you’re too cool to do anyone’s bidding. In this Flying Monkey Costume, you’ll be the one folks will bow to!

And while you shouldn’t actually try to fly in this outfit, you will truly adore showing off your wingspan in this cozy jumpsuit and boss flannel jacket. You also get a hood with attached fez and plenty of fringe, so no one has to guess which powerful posse you belong to. We can’t decide if we want to hug you or run from you, but either way, we want to at least snap a photo of this rare sighting and share you on social media. So about that flying bike...you wouldn’t happen to know where to find one, would you?