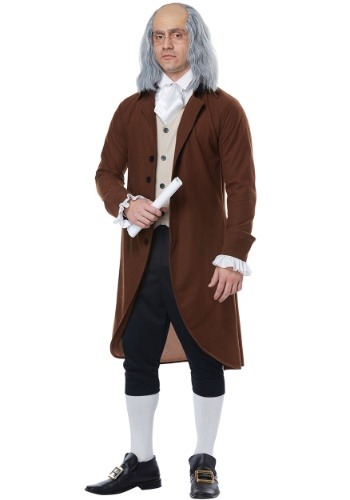 With the Hamilton musical, the founding fathers are really getting a comeback! Now, we're not saying that they are going to show up on the cover of Rolling Stone any time. But in this day and age, it's fascinating to look at what these guys did with very few resources, freedom, and technology. Each founding father played their role. Washington was the military genius that buoyed America's revolution forward. Hamilton was the hardworking idealist. And good ol' Benny. Well, he was the mad scientist turned socialite turned diplomat. When he wasn't hobnobbing with the French to get them to fund our independence seeking war he was inventing ways of preventing disastrous lightning fires or trying to get the idea of bifocals off the ground. And when he wasn't working he was taking one of his infamous "air baths". We won't go into it, the visuals are with us but they don't have to be with you. So when it comes to dressing as a founding father, we all know the Benjamin Franklin is the most entertaining character there is out there even with his receding hairline. p

Whether this costume is for a historical reenactment, a play, or just for fun, you're sure to get in character as soon as you slip it on. The jacket is layered over a full vest and is accented with a cravat tie. The long coat will make you feel official as you make your entrance into both European and American courts. The short pants have an elastic waist, letting your outfit stay tucked in and you remain comfortable.

You'll go down in costume party lore when you show up to any Halloween bash dressed as the gregarious Benjamin Franklin. All you need to do is top off this look with our hilarious receding hairline Benjamin Franklin wig and you'll be ready to spread the word of our new nation. Hey, play your cards right and you might even come up with a few inventions as the evening goes by. Never hurts to step into the shoes of a genius!