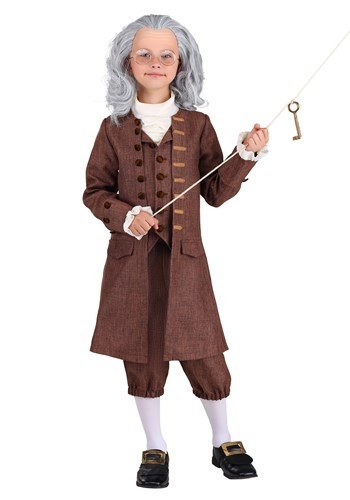 History is cool. We know, we know. Some people think it's actually not cool to think that, but just look at all of the awesome stuff Ben Franklin did during his lifetime! Let's see... first, there are the countless inventions that he created, like the Franklin stove that helped keep people warm during winter. Then, there are bifocals, which are largely unchanged from his design to this today. If that wasn't enough, the dude even created his own instrument called the glass armonica! Oh, and did we mention that he helped write the America Declaration of Independence? Yeah, Ben Franklin was like the Elon Musk of his time... except Ben started a brand new country, held the title as the first Postmaster General of the United States, and earned his place on the hundred dollar bill!

If that's not cool, we don't know what is. That's also why we happen to think that this Boy's Colonial Benjamin Franklin Costume is one of the coolest costumes a kid can wear!

This historical costume is based on one of the greatest figures in American history! Our costume designers took care to create a look that was befitting of the Founding Father, so they studied classic portraits of Ben. This costume is what they came up with! It starts with a brown jacket that has decorative buttons along the front to give it a colonial style. The jacket has an attached vest, making it easier than ever for your child to get dressed up! The matching pants are also brown and have an elastic waistband for fitting. Finally, the costume also comes with a cravat to complete the look. To get the look seen in the image, be sure to check out our wig, socks, shoe buckles and glasses to finish off the look (all of which are sold separately).

If your child thinks history is cool, then Ben is his man! This Made by Us costume is a great way for any kid to dress as their hero, Benjamin Franklin!