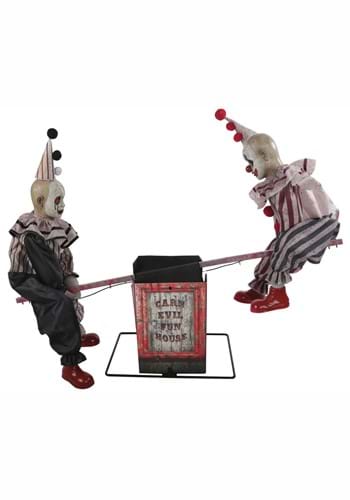 It seems to us like we missed out on some choice encounters our far-off ancestors got to enjoy. Only a few short centuries ago, it seemed like folks were always stumbling across unicorns and dragons, or getting bombarded by ecstatic visions of angels and ghosts. We're stuck with more modern mysteries, like, "where did we put our car keys?" Or, "what's the closest establishment that will deliver a burrito to my living room?" But then again, maybe we should appreciate what we've got and the perils we don't often have to encounter.

But every so often, it's good to remind people that mysterious, almost inexplicable forces could be lurking around every corner. It keeps them sharp, you know? But we're guessing that if you hang our missing car keys on your front porch, people will be more confused than enlightened. Here's something they'll miss at their own peril and understand down to their bones to avoid: this rattle-your-bones scary 36-inch Animatronic See-Saw Clowns Prop. When activated by infrared motion sensor, a step pad, or an old fashioned on/off switch, the see-saw moves up and down and eerie music pours out of it.

Set it on your porch (but don't let it get wet; it won't tolerate water, to put it lightly) or in your entryway—or dangerously close to your neighbor's yardline. For one glorious moment, force your neighbors to look upon the spectral faces of a cruel joke straight from the underworld! Add some playhouse music, and they'll be shaking in their boots. We aren't sure what else you could want in a scare: unexpectedness, oddity, spooky music, and clowns. It's a veritable amalgam of horror. Use it wisely, but remember that neighbors—heck, even friends or family—aren't obligated to maintain relations with you after giving them a stroke.