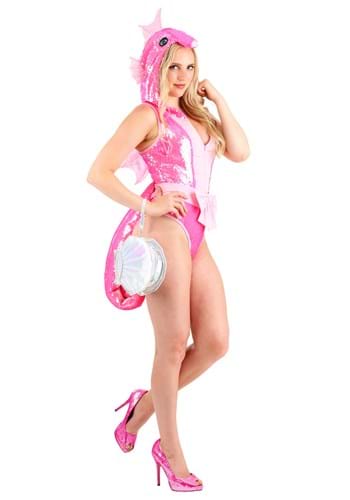 Sea and Be Seen

When you think of Halloween, you may think first of ghouls, ghosts, goblins, vampires, and witches. That's fair. But there's another way to capture that otherworldly mystery of Halloween besides traveling to the afterlife. Think of the watery, dark shadows lurking under the surface of the sea. The sun sending light columns down into the deep. The wonders of the ocean never cease, and prove a true treasure trove of cool, unique Halloween costume ideas.

Take this Women's Sequined Seahorse Costume, for instance. It's a totally fun take on dressing up, without the eerie gore. In fact, it's truly fetching! Be beautiful this holiday and show your friends that there are lots of ways to think about the fantasy land that is Halloween—after all, the best costumes are those that transport you to another world, even the world of the deep sea!

This exclusive costume shines as a true jewel of craftsmanship and allure. It's a shimmering pink, iridescent bodysuit with a seahorse tail. The bodysuit zips in front and features all over sequins, except for the front-stitched panel. There are glimmering fabric fins and a hood with eyes and a sculpted seahorse snout. The tail attaches via a wide pink belt with a large bow. We're not going to lie, it was hard to make a seahorse look this good, but we think we nailed it!

Now that you've discovered the magic of this look, maybe you'll find that you want to keep exploring this sea theme for Halloween costumes to come!