Queen Elizabeth I Costume for Women 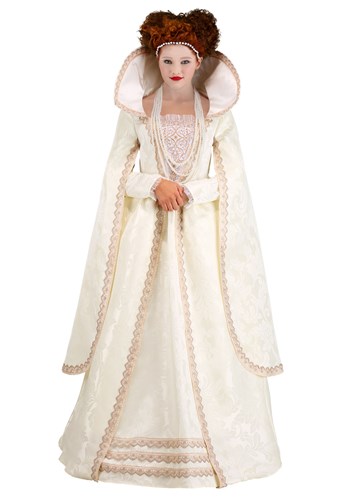 While remaining a popular costume for kids, the life of a princess has never been easy throughout history. As long as one was a princess, there were extreme expectations for your behavior and education. You had to learn to become a diplomate as well as the model for all the young ladies in the kingdom. That might mean grinning and bearing it while your father, the king, creates a new religion so that he can annul his marriage to your mother effectively disinheriting you from the throne. This Queen Elizabeth the First Costume is not for a pretty princess, it's for a powerful matriarch.

Our creative team assigned this design to our resident history buff to create a costume that's worthy of Queen Elizabeth yet affordable by modern standards. This being said, you'll find delightful details within this costume. For instance, the fitted sleeves are trimmed in sheer ruffles and layered under dramatic draped outer sleeves. Queen Elizabeth’s trademark stand-up collar is kept in place with stiff foam covered in the same brocade of the gown to make sure that your character is instantly recognizable. Zipping up the back, you won’t have to depend on a team of servants to slip into this iconic historic costume. And if you want to go above and beyond, add an over-the-top red wig and pale makeup to complete the Queen's aesthetic.

Queen Elizabeth had to deal with getting left in the lurch for many years throughout her teens and young adulthood. Her road to the throne was not a simple one. But once this matriarch became queen, she not only took the throne, she captured the hearts and imaginations of England. While she ruled over 400 years ago, we still are looking up to her royal air. Are you ready to channel this royal icon? Slip into this Made by Us costume to leave your princess garb behind and become a queen!