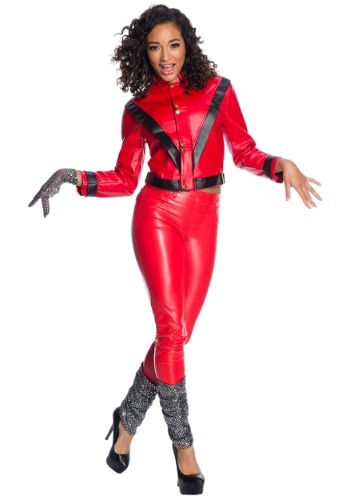 Dancing with the Zombies

We're a bit torn. We SHOULD hate the music video for Thriller. Smooth dance moves and funky bass grooves are what dreams are made out of. But zombies? Those things give us the creeps and they're pretty gross. That should be enough to make us never want to watch the Thriller music video again, and yet... Michael Jackson is dancing around with all of them. Those undead ghouls must not be so bad after all. Maybe we'll give them a second chance, and so should you! If you plan on dressing up like Michael Jackson this year, then you're going to have to give those zombies a second chance. After all, dancing comes with the territory! You do plan on dressing up like MJ, right?

Great! Well, aside from being okay with dancing zombies, you're also going to need a realistic Thriller outfit. It's the only way to cosplay as MJ! This women's premium Michael Jackson costume fits that role perfectly.

This licensed costume for women comes with everything you need to dress up like the King of Pop (minus the fondness of zombies and the killer dance moves). It comes with a red jacket top with black accents in front, shaped like a V. It has a faux leather exterior and a button up front that makes it look like it came straight from the Thriller music video. The matching red pants are made of a similar material as the jacket and will help you complete your transformation into the pop star.

Get Your Moves Down