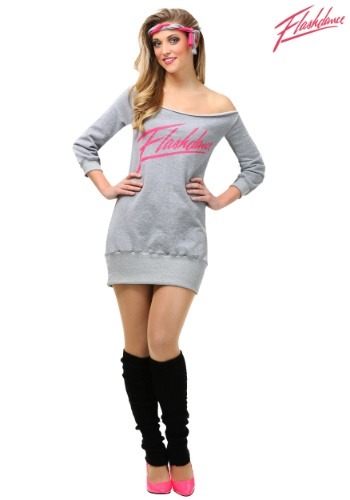 One day you're an average everyday eighteen year old steel worker who lives in a warehouse that has a perfectly shabby chic appeal and the next you're a auditioning for the local dance company. Hmm, most people would just be happy to have a job with benefits, an awesome flat, and successful burlesque career on the side at the young age of eighteen but hey, maybe times have changed since the eighties.

We're not saying the charming Alex had it all. Sure, we're jealous of her adorable, well behaved dog and her handsome and well connected boyfriend but her wardrobe could use some work, right? Right? Nope, lucky for her she was a steel worker, not a business woman, so she was able to avoid the shoulder pads and overly ambitious blush of the early eighties. Instead she's looking ever so chic in scene after scene in her military surplus gear, wide ribbed knit sweaters, and of course the famous trend-setting off shoulder sweatshirt.

Now, in our current economy you can't rent a warehouse on a low level welder's salary. In fact, good luck finding a welding job at age eighteen. The good news? You can totally rock that off the shoulder sweatshirt look. In fact we've put it all together for you. With this costume you'll get a long sweatshirt that'll cover the dangerously high cut leotard that you may or may not be wearing. You'll also get a headband to keep that wild eighties hair at bay and some leg warmers to pad your legs as you're showing off those break dance moves. Not bad for your average eighteen-year-old steel worker.