Women's On The Prowl Catsuit Costume 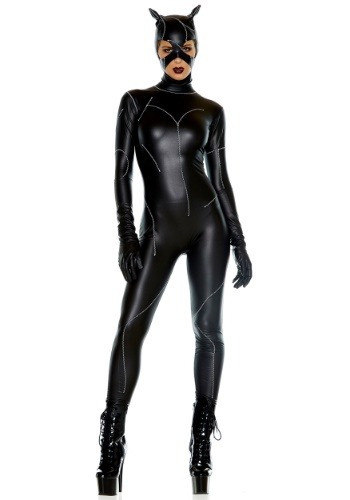 If you think your pet cat is cute but kind of a shady character, you're not alone. It's widely known that felines, although fuzzy and adorable, are temperamental creatures. One minute they're enjoying a gentle belly rub and within the next minute, they've made the executive decision that belly rubs are the worst and they immediately need to claw the hand until blood is drawn. Like we said, cats are strange and unusual critters but we love them anyway.

The same can be said about this pretty kitty right here. Yes, it may look tempting to give her a pat on the head or a belly rub but it could result in a couple swift scratches. You won't even see it coming! She gives the term 'cat-like reflexes' a whole new meaning. Although this cat is a little cagey, she's a good ally to have on your side so take some time to sweeten her up by giving her treats. Maybe a live canary if you really want her on your side...

Slink into any party dressed as a "feline fatale" and you'll command the scene. The stretchy high-neck faux leather jumpsuit keeps you covered up while flaunting every curve. White stitching is an added detail on the jumpsuit and the mask. The mask also features two large holes so your beguiling eyes can peer through and two stuffed ears perk up from the top.

WOW WHILE ON THE PROWL

There might be a bat and a penguin as well as other animals. but no one will be more fierce than you. Ensure that you're the most cutthroat kitty by pairing long black gloves and matching heeled booties with the link— maybe even a whip since you'll eventually get bored of using your claws.