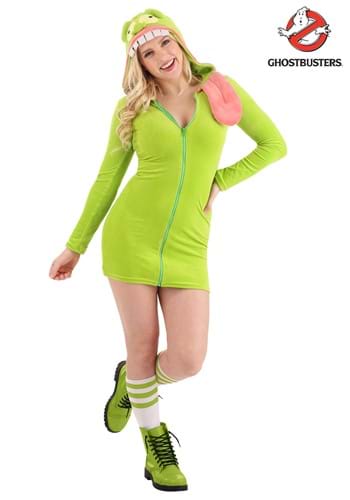 Not all ghosts are evil! Well, okay. Maybe most ghosts are sort of evil. Gozer is bent on the destruction of the universe as we know it and Vigo wants to take over the world. And then there's the Scoleri Brothers. They're definitely up to no good. But what about Slimer? He's not trying to be evil at all! He just wants to taste some good food and have a good time! In fact, we think an evening out on the town living like Slimer seems like a total blast...

That's exactly why our designers made this Ghostbusters Slimer Hoodie. This officially licensed costume will help you transform into the classic character from the 1984 film. It's a simple outfit that's as comfortable as it is cute!

This women's Ghostbusters Slimer Hoodie Costume is inspired by the green ghost seen in the Ghostbusters films. The green hooded dress is made out of soft stretch velvet material and has a separating zipper in front. The hood is shaped like Slimer's face and comes with his eyes, nose, and eyebrows sewn to the top of it. The side of the hood has a stuffed tongue, which flops down the side. The top edge even has a row of white felt teeth! All you have to do is zip up and you're ready to head out as one of the most iconic characters from the 1980s!

If you want to show the Ghostbusters that some ghosts are good, then it's time to slip into this women's hooded dress! Of course, you could also dress up to cause a little mischief with all the other ghosts in town. Just don't be surprised when Venkman and the crew show up to your party with their proton packs!