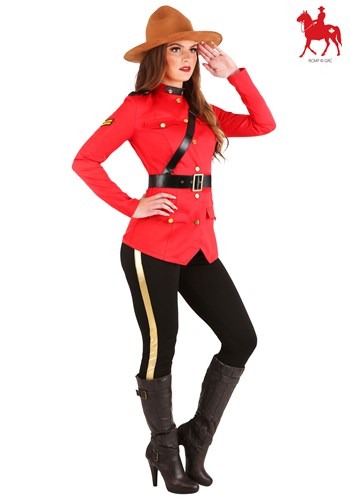 Are you the type of person that walks a little bit taller whenever you're decked out in an official-looking uniform? You know that you're a member of a team. Maybe it's the perfect combo of colors that just put your mood in the right place. Of course, if you've got a uniform that carries with it a bit of authority, that's even better. Will the locals offer up a salute whenever you walk by? Will they watch with eager attention? And, most importantly, do you get a horse!?

Alright, most uniforms don't actually include magnificent animal mounts along with the look. In fact, it's been a good while since even the Royal Canadian Mounted Police actually used horses in their patrols. Except for ceremonial moments, in fact, their attire is much more similar to the look worn by officers throughout the rest of the world. But, the key word there was ceremonial. That means there are still great moments to deck yourself out in luxurious red!

Kick off your evening right with this Made by Us costume inspired by the classic look of the RCMP. This Canadian Mountie costume is a feminine and fun twist on the classic look of the red serge tunic of Canadian history. Gear up first with your red jacket, complete with gold buttons and a hook and loop neck closure. The shoulder and collar accents are a black satin that matches the jersey pants and vinyl belt. If you like, you can upgrade your look by picking up a traditional-looking Mountie hat (though we recommend sticking to a toy horse unless you've got room in the stables).

Until the horses are ready for the full mounted role, you can kick your heels up in this Women's Canadian Mountie costume. (That way you aren't scratching up the sofa with the spurs, too!)