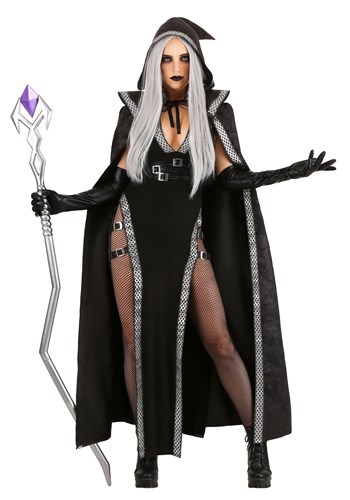 Out of the bog and into the Smog

Once upon a time, a long, long time ago, witches lived in swamps or deep in the woods. They were weathered from years of making potions for ungrateful customers in isolation. Now that it's the modern era, all that has changed. Modern witches are sleek, fierce ard here to stay! These witches are serious entrepreneurs. Last weekend, we stopped in at this witch's pop-up shop where she puts her cauldron skills to use making sparkling potions with modern uses. There's a draft that you can serve to your friend before backing out of social engagements, and they'll instantly forgive and forget. And a potion that will cure you of your social media addiction, this one is extra popular during finals week. It's safe to say, we're sold on their new, witchy upgrade!

Of course, modern witches deserve a modern wardrobe. A wardrobe that alludes to their powerful past, while embraces their new metropolitan setting. That's where this costume comes in! Designed by our in-house creative team, this flowy look is trimmed in silver brocade and accented with head-swiveling details. The dress, neck cowl, and cloak can be worn separately or together. The featured dress has attached faux-leather belts cinching the waist in while matching buckles add an edgy touch to the slits on the skirt. The hood has a heavier, aged leather texture with sculpted shoulders and a drooped hood that gives its wearer a mystical silhouette.

It's time for the mystical folks to stop lingering in the shadows and take their fabulous place at the table, at least on Halloween night! Make the most of this magical costume with accessories such as the wet look gloves and futuristic staff featured in this photo. With a look as tough as this one, you can be sure that no one will take you for just any basic witch!