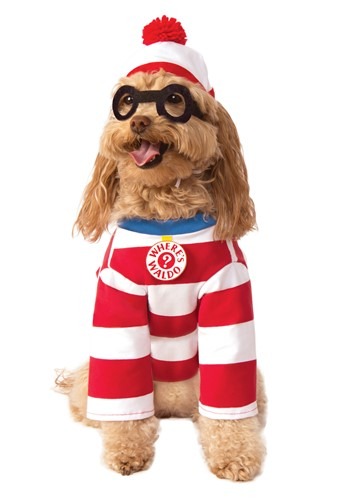 Waldo, of Where’s Waldo fame, has been called on by his mentor, Wizard Whitebeard, to once again stop that pesky Odlaw and his cane snatching plots. This time though, Whitebeard is sending Waldo back to the Land of Woofs. Rumor has it, Odlaw believes he can recruit a dog to help sniff out Waldo’s cane and finally break into Fort Knox to fulfill his wildest gold stealing dreams.

The Land of Woofs is inhabited by dogs alone, so common sense dictates that Waldo would stick out like a sore thumb (for the first time ever) if he were to show up in his normal appearance. Knowing the risk of this journey, Wizard Whitebeard has decided to disguise Waldo as a dog. Waldo agrees to the hairy plan, asking only that he can keep his glasses.

Wizard Whitebeard does Waldo one better with this Where’s Waldo Pet Costume. As it turns out, all the dogs in the Land of Woofs wear a very similar red and white striped wardrobe (history doesn’t state if Waldo or the Woofs wore it first). With his bobbled hat and striped shirt, Waldo is ready to comfortably travel to the Land of Woofs to stop Odlaw. Since Waldo is prone to losing even the most important items, the hat and glasses in this Waldo pet disguise have elastic bands to keep everything in place. It’s up to this four-legged Waldo to ensure another Odlaw defeat!

Get your own pet ready for the quickest game of hide-and-seek you’ve ever played. Unlike when you’re looking in the books, you’ll have the upper-hand finding your pet while they’re dressed in this Where’s Waldo Pet Costume. That is of course if you don’t live in an overcrowded area full of odd characters and an abundance of barber-shop poles. If you do, your four-legged friend is probably going to blend in too well, just like Waldo.