US Adult the Tethered Costume 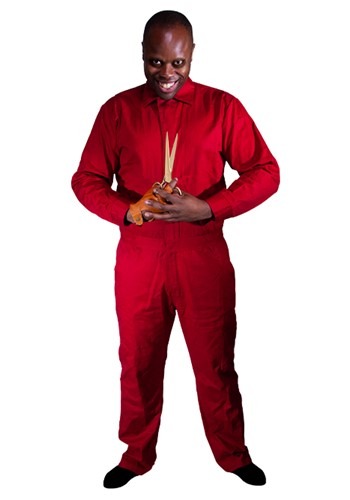 Jordan Peele really knows how to do a number on the psyche. His first thrilling horror film, Get Out, was a huge success, which made some people nervous about his second film. The second film is almost never as good, right? But once again, Peele delievered another fantastic film, this one even more horrific than Get Out. Like his first film, US is more than just a horror movie; it's a commentary on current issues in society. You'll be a terrifying reminder to others (and yourself!) when you wear this US Adult the Tethered Costume.

This red bodysuit is simple and utilitarian, just as if it really was a government issued item. This one has a front zipper with some snap buttons to secure it. Then there are the strange, but equally necessary accessories that come with being one of the Tethered. Each costume comes with a fingerless, faux leather glove and a pair of golden plastic scissors. The Tethered are all about "cutting ties" with their counterparts, so they make sure to be armed and ready!

Look in the Mirror

When you look in the mirror, who do you see? Do you see yourself, dressed up in a scary costume for Halloween? Or do you see a shadow, waiting in the darkness to steal away the life it's never had? Oh, now we're getting the shivers! Either way, you're sure to cause a few goosebumps, and maybe some good conversations, at your next costume party.