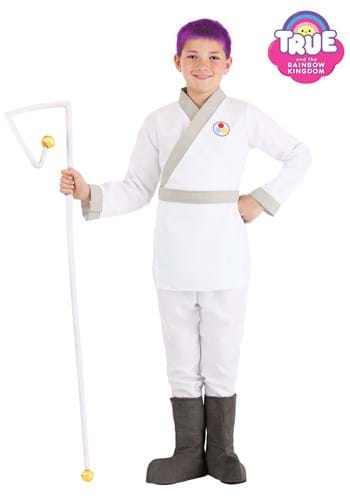 Is your kiddo all about True and the Rainbow Kingdom? Great! Kids around the world love the fantastical adventures of the heroine True and Bartleby the cat. They get to explore the Rainbow Kingdom while True helps outs by solving problems. But, if your child would prefer to roleplay as someone other than True, well, that's no problem. Because there are lots of other amazing characters who reside in the Rainbow Kingdom! Take Zee for instance. This cool character is a boy who happens to be one of True's best friends. He helps True out all the time, so he's been on plenty of adventures. He's even an expert on the Wishopedia, the book that helps True with the Wishing Tree!

If you have a child who'd like to bring the True and the Rainbow Kingdom fun to life, we're proud to have this Zee costume for kids to get into the role! We've teamed up with Guru Animation Studio to produce officially licensed costumes from the hit Netflix series, and this Zee outfit is the perfect representation of the purple-haired character.

This True and the Rainbow Kingdom Zee Costume for boys and girls is exclusively Made By Us. Expertly designed by our team of pop culture-obsessed costume designers, it includes a robe, pants, a pair of shoe covers, a belt, and a staff. Zee wears a martial arts style gi, and this outfit looks just like what he wears on the animated show. The white robe top has khaki at the cuffs and robe lapels and features a 3 button patch. The khaki belt is worn over the robe, and plain white pants pair with foam boot covers that can be worn over shoes or socks. Finally, Zee's famous staff, the Zingy Zapper, is included too, so your child can practice moving wishes!