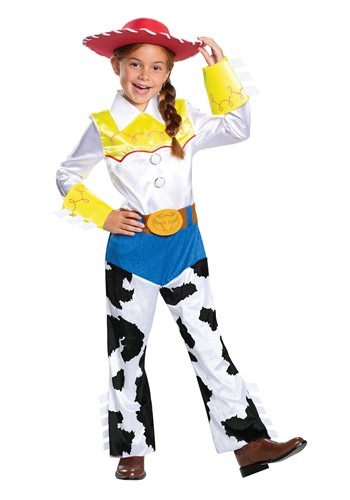 THINK OUT OF THE BOX

The best part of being a beloved toy is that you are going to have a ton of opportunities to be just about anything that can be imagined. Toss a fishbowl with suction darts onto Rex and suddenly he's a space dinosaur. Toss a plastic stethoscope into Mr. Potato Head's ear holes and that's Dr. Potato Head, thank you very much! So, it's no surprise that Andy quickly found a home for Jessie when she joined the toy box crew in Toy Story 2.

Now, she's a gal all her own and she's got plenty of options for what adventures are going to be tackled. (Even if it means going on an epic stargazing mission with a certain 'infinity and beyond' Space Ranger!) We all know that Jessie doesn't like being boxed up, so what amazing stories are going to be told next? Well, we think that no matter how great all the movies, series, and shorts Toy Story offers us may be, the stories that your kiddo can craft are way better!

It'll be time for your tyke to yodel out in fun with this officially licensed Deluxe Jessie costume from Toy Story. This is a jumpsuit that is easy to wear and features printing to look just like the character's outfit. That means a pair of cow-print chaps over her jeans, a longhorn buckle, and her iconic white blouse. We've made sure to show off her bright yellow accents and swirling red doodles that go great with the red, wide-brimmed hat.

No matter what you want to end that sentence with, the answer is a resounding yes! Your kiddo might be the first Cowpoke Ninja or perhaps will be a Dr. Jessie, Medicine Cowgal. Who knows? Your kiddo might even just want to act out the movies, line by line, and become the next famous voice actor!