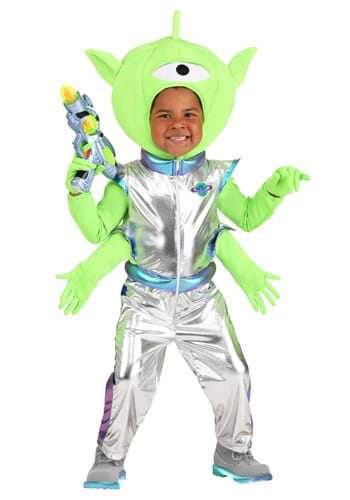 The Alien in Disguise

Aliens are pretty crafty! In the movies, they're always sneaking around on planet Earth disguised as humans. They have some pretty convincing disguises. Your neighbor or your dentist could secretly be an extraterrestrial and you would even know it! Why, even your little one might be from another planet...

Just think about it for a second. Do they ever make some unearthly noises, almost like some kind of strange language from another galaxy? Do they ever refuse perfectly good human food, almost like their alien bodies cannot process it like a normal human? Do they ever steal your phone and try to communicate with distant worlds? Well, these could all be signs that your child is actually a visitor from another solar system! Of course, they're still your little one, so you'll want to help them be the best version of themselves, even if that happens to be a space alien! That's where this Friendly Alien Costume comes into play!

This toddler alien costume helps transform your child into a friendly extraterrestrial! The costume is a Made by Us design, which means our designers went to great lengths to add some extra-spacey touches to the outfit. The costume starts with a silver jumpsuit that fits with a zipper down the front. The sleeves are bright green and it even has a pair of faux alien arms attached to the sides. The hood is shaped like an alien's head and even has stuffing to give your child a round and plump alien head! Put it together and your little one will look like an invader from outer space!

Of course, if the who friendly alien isn't your toddler's cup of tea, you could always grab a few of our toy ray guns and help them conquer the Earth for his alien pals. (We won't judge.)