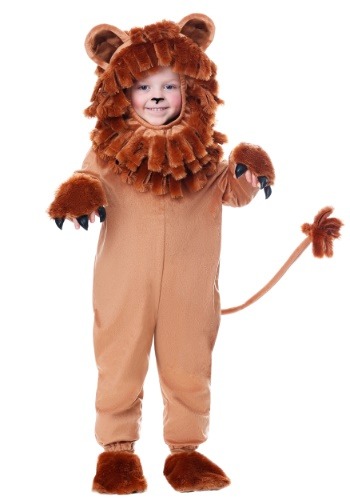 It’s inevitable. He might be just a little one now, but someday soon, your little one will need to venture into the world. After all, every cub must leave the den eventually. Don’t worry though, since you’ll have quite a few years of playing guardian to your little cub! Of course, you might want to start preparing him for the adventures that await him in the pride.

First of all, you’ll need to teach him how to roar. Every little lion needs to be able to let out a ferocious growl to ward of hyenas and would-be-enemies of the pride. You also might need to teach him how to chase down a zebra. Most importantly, though, you’ll need to help him get a nice, thick mane going! Every grown-up male lion has one and it’s easier than ever for your child have his own mane with this adorable lion costume.

This toddler Lovable Lion costume transforms your little cub into the most ferocious animal in the savannah. The costume comes with a tan jumpsuit that’s soft to the touch. It has attached “lion paw” mitts on the sleeves, which feature soft brown faux fur. The back has an attached tail and the entire piece fits with a zipper in the back. The headpiece has a brown, fuzzy mane around the neck and it even has a pair of rounded ears on top. Finally, the foot covers fit over your toddler’s shoes to give him a pair of cute little lion paws for feet!

Adventures in the Pride

When your child has this lion costume on, he’ll have the confidence to head outside the den! He might get into an adventure or two as the king of the jungle, so you might want to keep a close eye on your little lion!