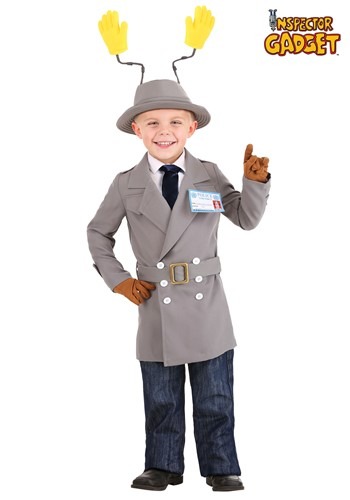 There are lots of famous sleuths out there. There’s Sherlock Holmes, who’s probably the most famous detective of all. There’s feisty Miss Marple. There’s Batman, who’s known as the World’s Best Detective—which you think would cinch the contest. But we contend that there’s an investigator who’s even better than the Bat!

We’re talking, of course, about Inspector Gadget! If Batman is cool for his utility belt, just take a look at Inspector Gadget who has a whole body of hidden tricks! He’s got skates that spring out of his shoes, a phone in his glove, a jetpack in his coat, skis, a necktie-lasso, and even helicopter blades that pop out of his hat! And that’s not even getting into his really weird gadgets, like his monkey catcher, his pillow fluffer, or his personal gumball machine. All in all, he’s actually got more than 14,000 gadgets! If that doesn’t secure him the No. 1 detective spot, we don’t know what will!

Our Made by Us team went over all the blueprints to make this exclusive costume as close as we could get to the classic cartoon character. This officially licensed Inspector Gadget costume for toddlers might not come with their own personal candy machine, but it does have Gadget’s famous yellow hands springing out of its hat! The costume is closely based on the classic cartoon, featuring a trench coat and matching hat. The trench coat has two columns of decorative buttons and a belt with a plastic side buckle, an official-looking ID badge, and there’s also a pair of gloves so that your little inspector doesn’t smudge any fingerprints at the scene. Of course, the best part is the inspector’s gray hat, which features two yellow hands attached.

Now all your little inspector needs is Penny and Brain to solve the case and defeat Dr. Claw once and for all!