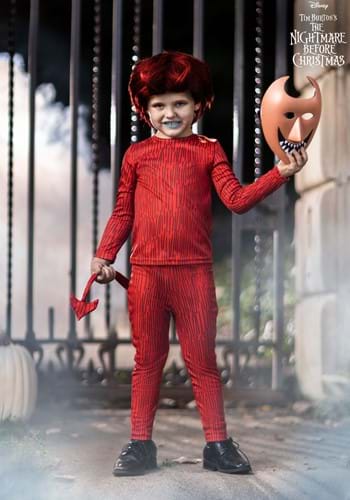 You and your partner were dead set on putting together a couple's costume based on Disney Tim Burton's The Nightmare Before Christmas. But one thing led to another and that Jack Skellington and Sally masterpiece you had planned fell apart like the Pumpkin King's attempt to improve Christmas. Now, instead of a family of two, you're a family of three.

Luckily, raising a tiny human has invigorated your imagination. Every charming thing your devilishly cute toddler does reminds you of a different Halloween Town resident. And with each sneaky giggle or quick race away from whatever mischief your little one has gotten into your idea for a Lock, Shock, and Barrel trick-or-treat trio grows clearer in your mind!

Get your handsome little devil dressed for the role that was meant to be when you choose our officially licensed Disney Lock costume for Toddlers! The exclusive costume makes transforming into the Halloween Town rascal a cinch with just three easy-to-wear pieces. Our team of designers started the costume with bright red jersey material for both the long-sleeve shirt and elastic waistband pants.

The costume takes on its illustrated appearance thanks to printed black sketch lines on both pieces. A wired devil's tail is attached to the back of the pants, so there's no need to worry about misplacing the signature accessory. And the costume is completed with a stiff foam mask identical to Locks.