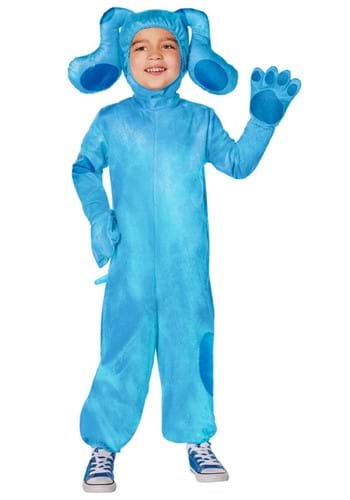 Everyone loves Blue from Blue’s Clues. She’s the sweetest, smartest, sassiest blue-colored dog we know. It’s always fun to hunt for clues with her and figure out a mystery, whether it’s the mystery of missing mail or the mystery of why a cake didn’t turn out well after we forgot to put in any sugar. (Looking back, that one should have been obvious without Blue’s help.) We think Blue is pretty much the best detective ever. Plus, she’s blue! Now, we’ve seen plenty of black dogs, and yellow dogs, and white dogs, and even a giant red dog, but Blue’s the only blue dog we know, and that makes her extra special. We’re not sure if her parents were also blue, or she’s just that special on her own. No matter what, she’s the coolest, bluest dog out there!

Now you can look just as blue as Blue with this Toddler Blue's Clues Blue Costume. The long-sleeved blue jumpsuit includes dark blue spots, blue paw print pads and even Blue’s tail! Plus, there’s a hood that comes with Blue’s perky, floppy ears, covered in more blue spots. You’ll look so much like Blue, your friends might need some clues just to figure out who’s real and who’s in a costume!

Blue is on the Case!

Once you pull on your Blue costume, you’ll be ready for any mystery, no matter how big or small. We know you’ll be able to spot all the clues, whether they’re on the thinking chair, the notepad, the mailbox or anywhere else. Nothing will escape your notice!