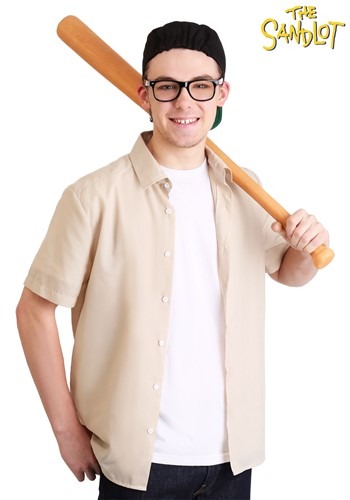 A League of Their Own Baseball Costume Hat
$16.99
Add

The team at the Sandlot are pretty famous. Let's just be honest. Most everyone recognizes the characters, even if the film might have come a touch before their time. The sequels might have gone direct to DVD, a term that some of our modern folks might not even be entirely sure about in the age of streaming services. But, still, a look at Smalls, Benny, or Ham is going to trigger some fond memories!

But, we can't forget the best character of all. There wouldn't have even been a story to be told if it wasn't for the... let's just call it creativity... of Michael "Squints" Palledorous. Now, perhaps the story of "The Beast" was an actual tale that Squints was told. But, with his happy "success" with the lifeguard, Wendy, we think we're safe assuming that this was a bit of Squinty exaggeration at work! Then again, it is that kind of memorable behavior that brought him back in #3!

It's not too common that you can dress up in a character costume and be appropriately garbed for both the child and adult version of the character! But, with this Squints Palledorous costume officially licensed by The Sandlot and Made By Us thanks to our in-house design team, that's exactly what you can do. The costume includes a black baseball cap, a pair of thick black glasses, and a light tan collared shirt. You just have to decide if you're going to be the 1962 or 1976 version of Squints.

We're sure part of the reason that Squints and The Sandlot has lasted the test of time is because of Squint's dynamic personality. Gear up in the look of the only nerdy guy brave enough to lay a smooch on the lifeguard with a costume that'll last as long as Squints will!