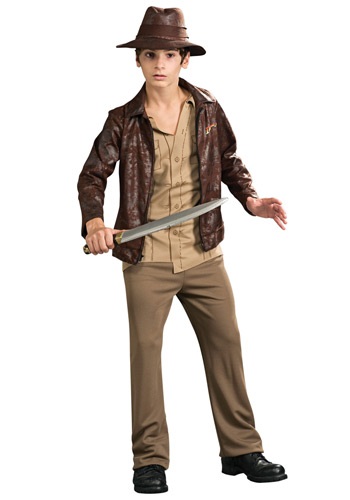 When he's not lecturing on ancient Mayan culture as a part-time professor, Indiana Jones is out globe trotting on missions to... how shall we say... obtain rare antiquities. All in the name of archaeology, of course.

Despite the fact that these are completely anthropological missions *cough*, Indie usually finds himself in the midst of ancient traps, gun fights, and occasionally rooms full of snakes. But who better to take on militant supremacists and crazy cults than the suavest archaeologist the world has ever seen? With a whip, ancient historical knowledge, and leather jacket (and no, we'd never forget the iconic hat), he's more than equipped to get back whatever artifact has been stolen. Or hidden. Or is in the process of being hidden or stolen.

So if you're feeling a bit adventurous yourself, or know a young adult who feels like buckling their swashes, look no further than our Teen Deluxe Indiana Jones Costume. It comes with a dark brown zip-up jacket with shirt attached. The shirt includes printed details of buttons and pockets (to look like Indie's). There's light brown pants and a felt fedora. Don this outfit and you'll find yourself following clues like there's no tomorrow! Now, we don't know what you've heard, but "X" never marks the spot... except that once and we're pretty sure that was a fluke.