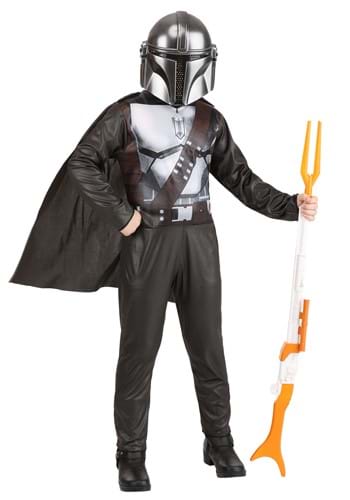 The wild West was a crazy time. At any moment, someone could nap your horse—a bar fight could break out, someone challenge you to a duel, or all of the above! Man, those days must have been as thrilling as they were dangerous. Well, The Mandolorian was a great interpretation of the West, translated into sci-fi. If you have a young one who is into westerns, Star Wars, or creative kids' costumes, check out this Star Wars Value Kid's Mandalorian Costume.

Yes, Mando is a bounty hunter. A lot of baggage comes with that, but when you are Mandolorian, "That is the way." You must keep your head on a swivel in the wild West of space. Luckily, our kids' Star Wars costumes come with all the swag of a Mando's beskar armor with non of the dangers. Check out this Star Wars Value Kid's Mandalorian Costume next Halloween. Worst case scenario, someone might want to duel you with a Nerf gun. That's reasonable.

The officially licensed Star Wars Value Kid's Mandalorian Costume is designed to replicate Mando's near-iconic chrome-colored beskar armor. Our beskar guy was on vacation, so we used plastic for the molded mask. Instead of a bulky boys costume a kid might fidget in, this comfy jumpsuit features all-over graphics of the Mandolorian armor. If your kid is a fan of the hit show and character, charge your blasters and pick up this Star Wars Value Kid's Mandalorian Costume.