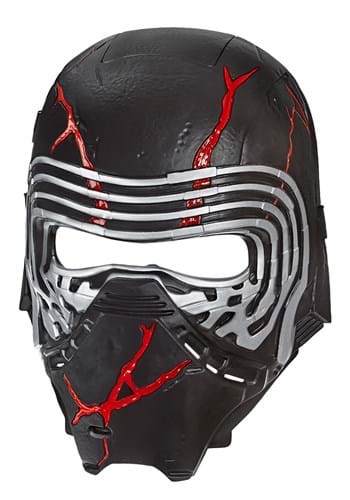 Two Characters at Once

There aren't many costume options out there that let you be multiple kinds of characters. Most are pretty settled in their ways. Heroic or a villain. Light Side or Dark Side. But, then you've got Kylo Ren. (Or should we call him Ben Solo?) Now, Luke and the others certainly faced down the Dark Side and made their choice, but Kylo has walked down 'em both!

Of course, that means that anyone dressing up as Kylo Ren gets to make some interesting choices, too! Which stage of the mysterious character do they want to be? Remember that Kylo started off as Ben! That means they could be a bright and cheery Padawan to Luke... but with eager aspirations to be like his famous grandfather, too! Still, you need something to help indicate whether you've got a Ben or a Kylo in front of you. Fortunately, we've got just the thing.

Help your tyke transform into one of the most powerful Force-wielders in a galaxy far, far away with this officially licensed Kylo Ren Electronic Mask. It is designed after the shattered and rebuilt look of Kylo's mask from The Rise of Skywalker and features electronic sounds from the film. The mask can be worn as part of a costume provided limited visibility through the visor or displayed as a memory of the Dark Side when your little Kylo wants to fight on the side of the heroes!

A Kiddo of Light and Darkness

Bring the Star Wars films to life with a bit of electronic magic thanks to this Kylo Ren helmet.