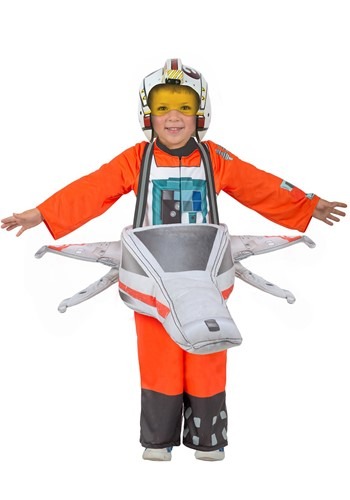 Okay, so maybe your child isn't quite ready to handle the controls of a real starship from Star Wars. This Child X-Wing Ride-In Costume will, however, give your child a pretty good start on the path to pilot-hood!

This Star Wars costume turns your child into an X-Wing pilot for the Rebel Alliance! It comes with a bright orange bodysuit, which recreates the look of a Rebel pilot with printed details in the front. It fits with a simple zipper in the front, so it's easy to wriggle your little one into this comfy costume. The mask is made out of molded plastic and fits with an elastic band around the head. Finally, the best part of this costume has to be the foam X-Wing piece. The piece is stuffed and shaped to look like the classic X-Wing from the Star Wars movies. It fits over your child's shoulders with adjustable webbing shoulder straps. Just slip it over your child's head and they'll be ready to blast down the Death Star in a jiffy!

Training for the First Mission

If you want to turn your child into the perfect wingman, then this officially licensed Star Wars costume is the way to do it! Of course, you might want to give you little one a few flying lessons before you let them head out on a mission against the Empire!