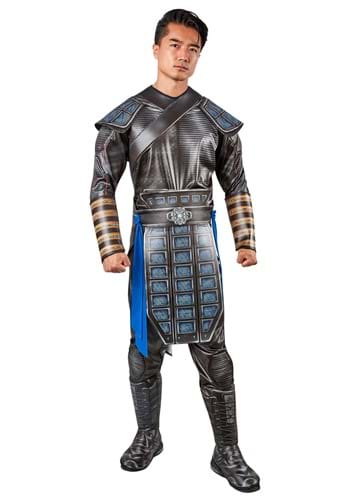 Most Fashionable Man on Earth

If you’re going to wear a plethora of rings, it’s important that your outfit can support the styling. After all, balancing a statement piece, even if it’s composed of several vintage items, with an ensemble can take work and an expert eye. But we know of someone who has conquered the art, Xu Wenwu. Take for example his crisp black top paired with the ten metallic rings. It’s a powerful look. And he wears it appropriately when watching his Ten Rings train. Meanwhile, his pairing of a clean, white, tailored shirt with those same glistening rings creates a perfect look for a casual dinner with a captive audience. But the best tip you can pick up from the Khan? When you want your outfit to say you’re the Most Dangerous Man on Earth, well, you go grab this Men’s Shang-Chi Deluxe Wenwu Costume.

Channel the most fashionable Warrior King when you add this officially licensed costume to your collection! Inspired by Xu Wenwu’s armor in Marvel’s Shang-Chi and the Legend of the Ten Rings this two-piece ensemble keeps your transformation simple. A long tunic features a high-detailed print to give the easy-to-wear top the look of realistic armor. Included in the print are the legendary ten rings—a much lighter way to wear the relic that’s surely heavier than Wenwu makes it seem. Providing a bit of shape to the shiny top is a pair of foam shoulder pads. Finishing the costume are elastic waistband pants with attached boot covers, all made from the same high-gloss material.

Whether you’re looking to rewrite the legacy of the ten rings or prove the Mandarin isn’t the only chic villain on the block, this Deluxe Wenwu Costume has you covered! Become the Marvel character with plenty of glitz and plans without worrying how you’ll acquire the rings from their original holder. Then create the Halloween candy, quick-dress cosplay, or playtime empire of your dreams!