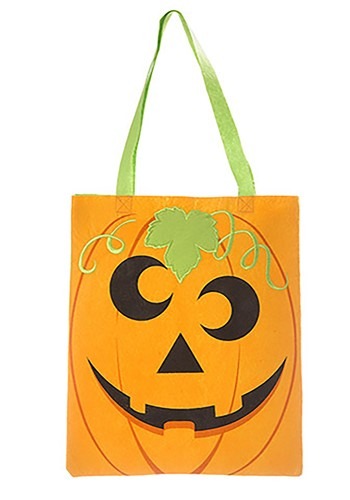 When your family gathered to carve pumpkins this year, your youngest surprised you with a detailed plan. They had a list of tools, like large spoons and a variety of carving-knives. They detailed how much of the pumpkin’s insides they would dig out. Other than the seeds and stringy bits, they were going to thin out the walls of the pumpkin so much that you questioned how strong it would be. The design for the face was unique as well, just two tiny triangle eyes and a simple smile to match.

You mentioned that you didn’t think much light would show through their jack-o-lantern and that it probably wouldn’t last the couple weeks leading up to Halloween. They shrugged and said it didn’t matter. Their jack-o-lantern isn’t intended to light up the night; it is meant to carry their Halloween candy.

As clever as a homemade jack-o-lantern candy bucket would be, your kid will be better suited with this Pumpkin Tote Bag! The light-weight 12.75” by 15” tote features attached handles to make carrying your kiddo’s Halloween haul easy. They won’t have to worry about their jack-o-lantern collapsing before Halloween night. This bright orange, reusable bag is designed to keep its cheerful printed grin and lively embroidered greenery for years to come!

Once a pumpkin has been cleaned out and carved to make a jack-o-lantern, they don’t make great containers. They’re drafty and prone to rot after a short stint as a decoration. But with this Pumpkin Tote Bag, your kid will be free to carry on with their jack-o-lantern bucket masterplan for as many Halloweens as they want!