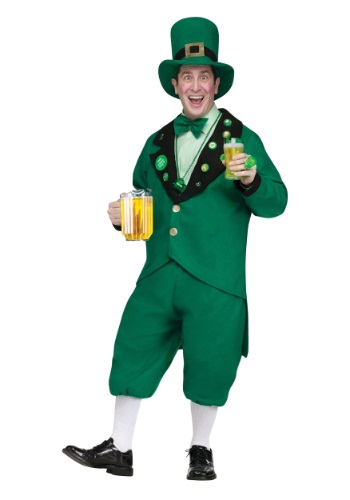 St Patrick's day at the pub

Look, let’s not kid ourselves: We know exactly what you're going to do with this Pub Crawl Leprechaun Adult Costume. You're going to head to the bars on St. Patrick's Day and have an awesome time. And we're 100% down with that! You've got great taste after all, but maybe there's just a little something we can do to put you in the mood for fun. "Lucky" fun!

An Ode to Lucky Charms

There's no denying it, taking one look at this costume makes us think of our all-time favorite kid’s breakfast cereal, Lucky Charms. So we’re gonna take this opportunity to drop some sweet, sweet knowledge on ya! Did you know that Lucky Charms is more than 50 years old? That’s right, buddy - since 1964, kids and adults alike have been sticking their hands down that red box, trying to bypass all that pesky cereal stuff in favor of the marshmallow bits (or, we should say, “marbits”, as the marshmallow bits are officially called)!

The cereal got its start from John. L. Holahan (aka Mr. Cereal - look him up!) mixing Cheerios cereal with circus peanuts marshmallow candy. Considering that circus peanuts are disgusting, that’s quite the lucky (geddit?) experiment! The first Lucky Charms contained toasted oat cereal puffs with marshmallows in the shape of green clovers, yellow moons, yellow and orange stars, and pink hearts. The cereal was in the shape of bells, fish, crosses, three-leaf clovers, and trees.