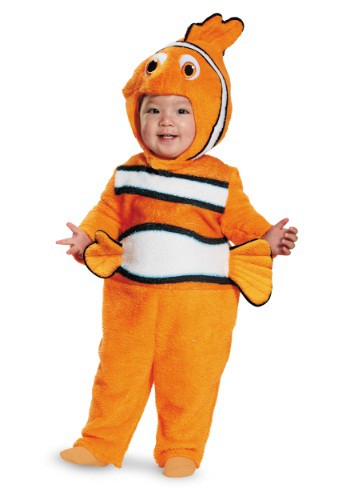 Are you getting worried? Are you thinking "oh this costume is great and all, and super cute, but I don't want to play 'Finding Nemo' in real life." That's a valid concern, sure. You're just being a good parent. But look at this thing. It's bright orange! There's no way this rambunctious little kid is getting out of your sight. Instead, your child will be overwhelmingly excited to swim around the room, never getting lost or floundering (eh? Fish puns!) when you're near. Besides, one of the big messages of the delightful Pixar film, besides never letting your kid get taken by Scuba divers (not to be trusted, if we're being honest. How are those people breathing under water, huh? Seems fishy), is that a parent has to let their child grow and risk and tackle adventures. It's a tough world out there and your kid needs to know the occasional scrape isn't the end of the world. They're a tough little fish and they can do it!

So quit clowning around and put them in the most adorable outfit this side of the Great Barrier Reef. Things will go swimmingly. And if they're dressed as little Nemo, it makes a great photo opportunity for you to dress up as dad Marlin or the unforgettable Dory (do you get it? Because she's so forgetful. Makes sense, right? It's a good joke, right? ... guys?). Can you believe the memories you'll be creating with that costume combination? Simply adorable, and certain to make a splash for years to come. That's right, little Nemo, swim for it!