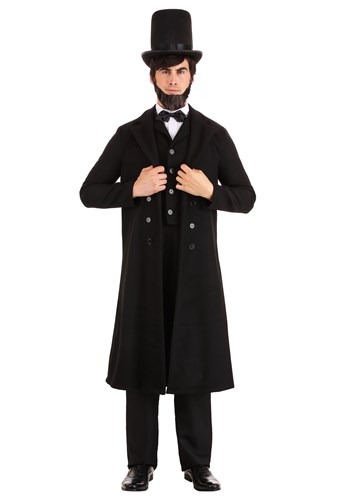 Fourscore and seven years ago…

Well, it’s been a little longer than that since Abraham Lincoln was president, but he’s still one of the most famous commanders-in-chief in our country’s history. Name a more famous president. Maybe George Washington, but that’s about it, and that’s not really fair, since he was the first president, and all. He got a lot of publicity for that. But Abraham Lincoln is definitely one of the best-known guys, and not just because he’s got his face carved onto the side of a giant mountain!

But Abraham Lincoln didn’t start out with an illustrious career. Did you know he actually argued a case in front of the Supreme Court and lost? He also lost five separate elections during his attempts to get involved in politics. So, we guess the best thing to learn from Lincoln is to never stop trying to fulfill your dreams, no matter how long it takes!

If you’re itching to dress up like one of America’s most beloved presidents, but you don’t want to wear wooden teeth to pull off a truly authentic George Washington, then we recommend this President Abe Lincoln Costume. The exclusive costume comes with a 100 percent polyester wool-like coat with an attached vest, which features a stylish button-down center. There’s also a satin bowtie with an elastic band to secure around your collar.

Of course, an Abe Lincoln costume would be nothing without his iconic top hat, and we’ve got you covered there with a dazzlingly tall black top hat featuring a shiny satin ribbon. (The shirt and pants, though, aren’t included, so make sure you don’t forget to add some before stepping out on the town!)

Hail to the chief!

Whether you’re heading to a historical reenactment or just a Halloween party, this costume is the perfect presidential choice!