Plus Size Mouse Costume for Adults 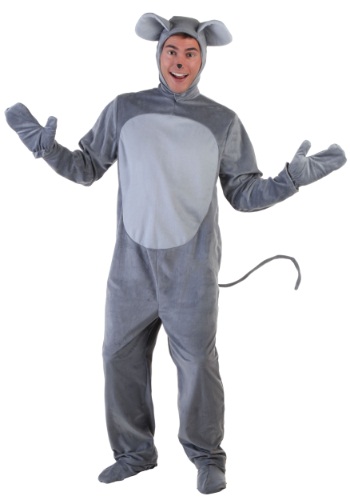 Some of the most iconic animal creatures in our costuming repertoire are among our client’s favorites. We have seen several lions and tigers go out and make events more exciting than they might have ever been as well as a surprising number of dolphins and octopi. Now, we scratch our heads a bit at those, but acknowledge that dolphins do breathe air and, as freakish as the fact may be, know that an octopus can hold its … breath (?) for a long time out of water. So, even aquatic disguises aren’t too unusual to see running around on dry land.

But, perhaps our most popular are the giant versions of the tiny cuddly creatures that fill our world. Especially as we near the holidays, we see adult-sized versions of chipmunks and mice become especially favored. Thus, we bring to you this Mouse costume that is no doubt going to make your home a joyful place. Now, we do have some giant-sized cats, too, so you’ve got to be a little careful with whom you’re traveling with… but we gave the same warning to the Giant Slice of Cheese costume customers about you. So, all is fair. To make up for the difficult time you’ll have hunting down the giant cheeses, enjoy this revised opening to another favorite:

’Twas the night before last and all through the house, not a creature was stirring except this big mouse! Adorably gray with mittens for hands, it was cute, but large… clearly a mouse-man. The gray jumpsuit and mock turtle-neck featured ears on the hood and Hook and Loop fastener to stick. A bendable tail was sewn into the back and mittens fold back when its time to snack. The night would be lovely with all going on track so long as nobody showed up as a cat!