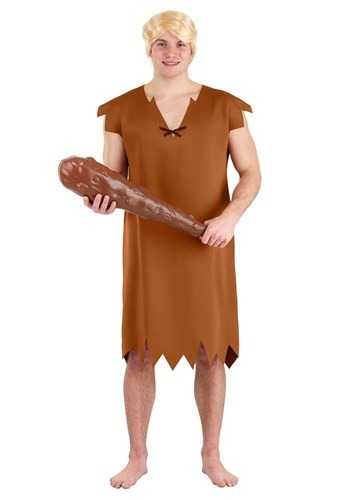 Those words have gotten Barney Rubble into quite a lot of trouble. He nearly always goes along with his best friend, Fred Flintstone, on Fred’s crazy schemes, like ordering two tons of dino burger meat to start their own restaurant or climbing into a boxing ring with a heavyweight champ so that Fred can use the prize money to buy Wilma an engagement ring. Then there’s the time Fred accidentally hypnotizes Barney into thinking he’s a puppy and Fred can’t remember how to undo the trick, or the time the two of them accidentally enlist in the military and end up as part of the first lunar landing. (Take that, Neil Armstrong!)

Somehow, Fred’s plans always end up with Barney suffering the most, but maybe that’s just what a good friend does. After all, Barney and Fred have been best friends forever, since literal prehistoric times! Barney would never let such a precious friendship go extinct! Without Fred, who else could Barney invite to the rock bar for some happy hour rock food and his favorite rock mug of rock beer? Who would go to the stone movie theater with him and have stone popcorn and stone soda? Who would go rock bowling at the stone alley?

Bring some prehistoric style to your next costume party with this Plus Size Classic Flintstones Barney Costume. The official, exclusive costume looks just like Barney’s outfit on the classic cartoon show. The pullover sleeveless tunic has jagged edges and is made of 95 percent polyester and 5 percent spandex knit. There are crisscrossed strips of faux suede at the neckline to look like a laced placket. (Note: The wig and toy club are each sold separately.)

With this costume, all you’ll need is Betty and Bam-Bam to make the evening complete!