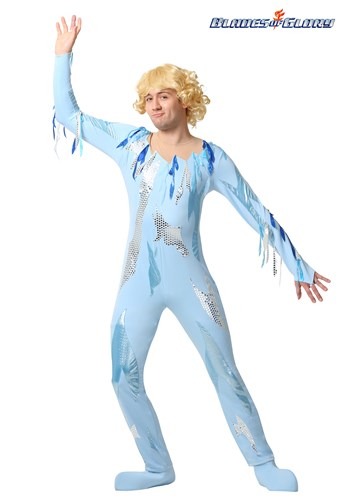 You’ll be ready to take on your one-time arch-nemesis in these digs. You know the guy, and you know his reputation: he’s sex on ice, a tsunami of swagger, a leather-clad Lothario, an ice-devouring sex tornado! That’s a lot to think about. It will be a lot to skate against, so you better be ready!

We suspect you’re here to gear up since you’re eyeing this officially licensed Blades of Glory costume. If you’re all about the 2007 slapstick comedy, you can relive some of your favorite movie moments from the Will Ferrell and Jon Heder classic when you rock this replica costume. With a design inspired straight from the movie, this costume is ready for glory whether you’re lacing up those skates solo or if you’re teaming up with a partner for Halloween’s tried-and-true costume combo, Fire and Ice!

Officially licensed and part of our Made By Us collection, you can rest easy in the run-up to your big match knowing that it was created by one of our in-house designers with all the love and care of a big movie studio. With the signature ice design that Jimmy rocked when he rolled into the 2006 World Winter Sports Games alongside Chazz Michael Michaels, you’ll have so much confidence at your costume party it will be disgusting. Now read that sentence again in Will Ferrell’s voice. Better now, yeah? Our Plus Size Blades of Glory Ice Jumpsuit comes with a pair of boot covers so you don’t get caught on the ice in your Converses, too.

So you finally found the costume that will let you muster the courage to be a star ice-skating duo. Hit that triple axel like we know you can and thank us from the podium, dude.