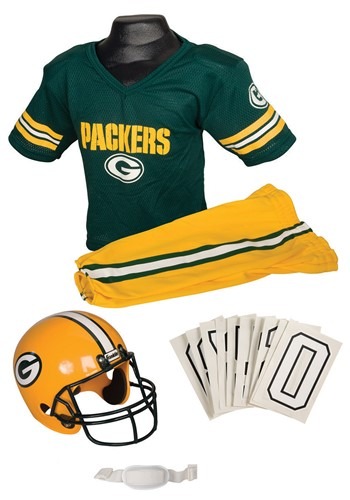 You might sometimes wonder where the Green Bay Packers are always so busy going, but as long as they beat those Bears, that's all that really matters! As a die hard “cheesehead” you gotta make sure you're all geared up for Game Day, and donning this officially licensed NFL Packers Uniform Costume is just the look you'll need to show off your team spirit!

Everyone has got their own way of showing their support for the team they love most. Maybe you like to go to the actual stadium to watch the action in person from the stands, cheering the Pack on in your lucky cheese wedge shaped hat, and chowing down on concession stand hot dogs. If you really want to have a blast, fire up the grill and invite all your buddies over to watch. What better way to show off your big screen and surround sound system (and also your mad nacho making skills) than by throwing a Sunday afternoon shindig and watching the big game? Plus, you don't have to deal with bathroom lines and traffic afterward, which is always a “win” in our book.

You'll also have plenty of good chances to show off your awesome Packers uniform before the game, as well as your passing skills whenever someone asks you to toss them a soda. This sleek ensemble comes in Green Bay's trademark green and gold, and includes official Packers logos and details, just like the uniforms worn by the players on the gridiron. Team up with your friends in matching uniforms, or have a rivalry with any of them wearing Bears or Vikings costumes!