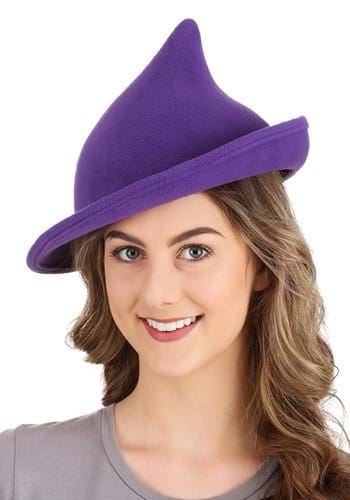 In With the New

Witches have been around for millennia, but surprisingly, until recently their signature look had not changed. It was all black cloaks, green skin, pointy black hats, and tattered old broomsticks. We're all for classic style, but surely a powerful, magical bunch of witches can update their look from century to century?

That's why you will be thrilled that at this year's Annual Witching Convention, the board voted to allow for a whole new modern style for practicing witches everywhere. Jumpsuits are in, now, as are electronic brooms, a whole spectrum of approved face paints, and this eye-catching Modern Purple Witch Hat! The board is even allowing spellbooks to be uploaded onto tablets, phones, and smartwatches, so it really is a whole new era. Step aside, black pointy hat crew, there's a new generation of magical mavens in town — and they are simply stunning!

This fetching cap is a fun play on the original witch hat — with its sleek point on the top — but it boasts a more streamlined and shortened silhouette. The felted fabric is bound to keep you cozy as you zip around on your new turbo broom, and the eye-catching purple color is just perfect for a fashion-forward, modern witch like you!